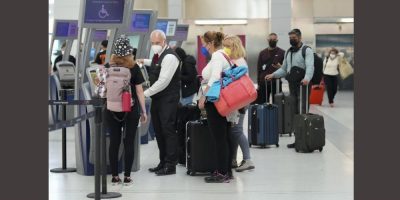 The new rules will come into effect on June 20, though the requirements for foreign nationals coming to Canada will not change.

Several ministers lauded Canada’s high vaccination rate at a news conference to announce the changes, but Intergovernmental Affairs Minister Dominic LeBlanc warned the government is prepared to “bring back” necessary policies if there’s a resurgence of the virus in the fall.

Travel industry groups have blamed federal public health measures and mandates for slowdowns at airport customs that have contributed to long waits for passengers and forced flight delays and cancellations.

They have put increasing pressure on the government to do away with them.

The decision to drop the federal mandate is not a response to the situation at Canada’s airports but rather is “based on science,” LeBlanc said Tuesday.

“We don’t regret at all being cautious when it comes to a virus that has tragically killed tens of thousands of Canadians and millions of people around the world,” he said.

Public health experts have known for six months that a two-dose series of the COVID-19 vaccine does not do a very good job guarding against transmission of the virus.

Health Minister Jean-Yves Duclos said the reason the government is changing course now is that there are encouraging epidemiological trends anticipated for the next few months.

“The number of hospitalizations, cases and deaths has fallen and experts tell us that we should expect the next few weeks in the summertime … to be relatively good in terms of COVID-19,” Duclos said.

The Public Health Agency of Canada has reported a steadily declining number of COVID-19 cases, though provinces are no longer providing COVID-19 molecular tests for the general public and federal reporting has become less regimented.

Travellers will still need to fill out health questions through the ArriveCan app when travelling to Canada, even though the Canadian Airports Council pointed to the added verification as one of the issues causing snarls at customs.

“We’re working on efficiencies to ensure that ArriveCan is less of a source of complaint, however it continues to be a meaningful tool to verify the vaccination status of travellers who are arriving into our borders,” Transport Minister Omar Alghabra said.

He said foreign nationals must still be vaccinated when they come to Canada to protect the country’s health systems. Travellers on federally regulated planes and trains will also still need to wear masks.

The vaccine mandate will be lifted for federal workers who have been put on unpaid leave because of their vaccination status.

The government has not revealed how many employees have been put on leave, but reports 98.5 per cent of public servants are fully vaccinated with two doses of a COVID-19 vaccine.

Those who have been on leave will be contacted by their managers to resume their regular duties with pay, Treasury Board President Mona Fortier said.

Fortier said she expects government agencies and Crown corporations to remove vaccine mandates for their workers as well, at least for now.

The Public Service Alliance of Canada filed a policy grievance against the government earlier this year on behalf of those put on leave, as well as public servants who work from home but still needed to be vaccinated or risk losing their pay. Several other public sector unions have made similar challenges.

The government made no secret that it hoped the mandates would pressure Canadians to get their shots, saying the move was necessary to protect the public from severe illness and transmission of the virus.

After the Omicron variant overwhelmed the country, opposition members and some experts began to question the effectiveness of the mandate, since Omicron was still transmissible among people considered fully inoculated.

However, some public health experts have called on the government to add a third dose to the vaccine mandate to protect against severe illness.

While more than 89 per cent of Canadians over the age of 12 have at least two doses of an approved COVID-19 vaccine, only about 55 per cent of them have received a booster shot.

Duclos said Tuesday the government will move away from encouraging people to be “fully vaccinated” and instead move toward making sure Canadians are “up-to-date” on their COVID-19 vaccinations.

He said not enough Canadians are up to date, and the government will work with provinces and territories to try to boost those numbers before a potential resurgence in the fall.

Banner image: People wait in line to check in at Pearson International Airport in Toronto on Thursday, May 12, 2022. THE CANADIAN PRESS/Nathan Denette

This report by The Canadian Press was first published June 14, 2022.