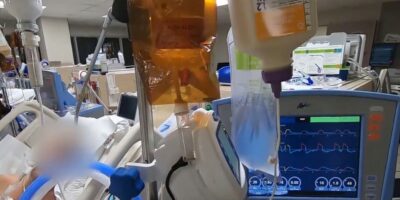 The state of Florida reported 15,299 new coronavirus cases over the past 24 hours on Sunday, setting a record for the largest number of new reported cases in a state in a single day since the beginning of the pandemic. The previous record stood at 11,571 reported cases in New York on April 14, when the state was the epicentre of the U.S. outbreak.

The Florida Department of Health said the state’s positivity rate, meaning the percentage of tests that came back positive, was 11.3% on Saturday.

There were 45 new deaths of state residents from COVID-19 reported in Florida on Sunday, for a total of 4,242 since the pandemic began. More than 18,000 people were hospitalized. The median age of people testing positive is 39 years old, according to the Florida Department of Health.

Florida Governor Ron DeSantis said on Saturday that 1,000 personnel will be sent to hospitals around the state, saying, “COVID is very labor-intensive so the personnel is something significant.” He also said a new shipment of remdesivir, an experimental drug used to treat COVID-19, is on its way.

On “Face the Nation” on Sunday, the head of the largest hospital chain in Florida said health care workers have adequate personal protective equipment and supplies to deal with the surge in hospitalizations.

“We’re much better prepared in July than we were in March,” said AdventHealth CEO Terry Shaw, who was interviewed before the release of the new figures. “Our length of stay in our ICU for COVID patients has dropped in half. The number of people coming into our hospital with COVID that need a ventilator, we’ve also been able to cut that in half, and because of those things, our death rate has also been cut in half over that time period.”

Meanwhile, Disney World moved ahead Saturday with reopening two of its four theme parks to the public at a “reduced capacity” after shutting down for four months. Michelle Quenzel, who helps run the blog “Streaming The Magic,” which has spent the past few days inside the reopened parks, told CBS Orlando affiliate WKMG that it has been “definitely busier” on Saturday. The park opened Thursday for annual pass holders.

In addition to masks and social distancing, guests and employees are now receiving temperature checks when they enter, and visitors are required to make reservations in order to enter the park.

To discourage people from gathering inside, daily parades and fireworks shows, a trademark of the Magic Kingdom, are no longer on the schedule. “High-touch” experiences, including character meet and greets, will also be put on hold.

DeSantis on Friday also said the state will be moving forward with plans to reopen schools in the fall.