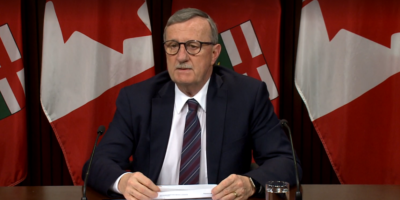 The doctor who has helped navigate Ontario through the COVID-19 pandemic will retire June 25.

The province confirmed Sunday that Ontario’s Chief Medical Officer of Health Dr. David Williams is leaving his post. Williams, who delayed his retirement because of the pandemic, has held the job since 2016.

The health ministry confirmed his replacement will be Dr. Kieran Moore, who is currently the medical officer of health for Kingston, Frontenac and Lennox & Addington Public Health. He is expected to begin his new role June 26.

According to a new release, the Ford government will table a motion Monday to formalize the appointment. Moore is expected to work alongside Williams beginning later this week to get a better understanding of what is ahead.

“Moore’s years of experience working in public health will be crucial as we begin to gradually lift public health measures,” Minister of Health Christine Elliott is quoted as saying in the release.

Moore thanked the government for the “great honour,” saying he does not take the responsibilities of the job lightly.

“If appointed… I would remain steadfast in my commitment to fight COVID-19 and I would provide all necessary advice to the government to ensure the health and safety of all Ontarians,” Moore is quoted as saying in the release.

Elliott thanked Williams for his service, highlighting “his dedication to safeguarding the health and safety of Ontarians during his many years of service.”

Williams came under intense criticism for his handling of the pandemic, even within medical circles, with some in the community calling for his removal.

While Premier Doug Ford has been steadfast in his support of Williams, cracks recently showed over the issue of reopening schools across Ontario. Williams said schools can be reopened safely. Ford sought out advice of educators, public health units and health experts.

The government has made no decision on whether kids will return to the classroom for the final month of the school year.