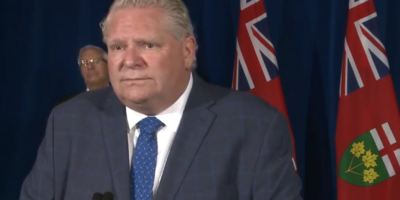 The Ford Government is making moves to extend parts of its emergency order another year, even as it considers lifting a declaration of a state of emergency.

Premier Doug Ford, joined by Solicitor General Sylvia Jones, announced today his government is introducing a bill that would allow Queen’s Park to extend or amend some emergency orders a month at a time, with the law expiring a year after it is passed.

“If passed, the proposed legislation would allow us to chart a responsible path to economic reopening and recovery without putting all the progress we’ve made in fighting this virus at risk,” said Premier Ford. “Even as we continue certain emergency orders under the proposed legislation to protect public health, we will always be a government accountable to the people of Ontario. That’s why I will ensure ongoing updates are provided and that a report is tabled within four months of the anniversary of this proposed Act coming into force.”

“While the declaration of emergency may come to an end shortly, the risk posed by COVID-19 is likely to be with us for some time to come,” said Solicitor General Sylvia Jones. “This new legislation would provide the government with the necessary flexibility to ensure select tools remain in place to protect vulnerable populations, such as seniors, and respond to this deadly virus.”

The Ford Government vows appropriate oversight and transparency would be ensured through regular, mandated reporting that provides the rationale for the extension of any emergency order.