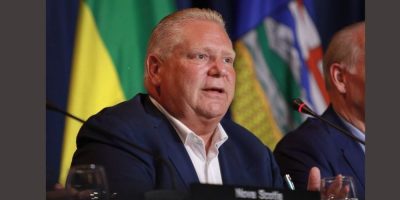 By Liam Casey in Dundalk

Ontario Premier Doug Ford says he’s a strong believer in public health care, but his government is going to “get creative” when looking at how it can be delivered as the province deals with a staffing crisis in hospitals.

Ford said Friday that “everything is on the table” when asked if Ontario is considering further privatization of the health-care system.

“I’m not gonna do anything without consulting with the experts out there,” he said at an appearance in Dundalk, Ont. “There’s one thing we’ll guarantee: you’ll always be covered by OHIP, not the credit card.”

When asked if patients would have to pay anything if they had surgery at a private clinic, Ford said it would be “100 per cent” covered.

“We’re never gonna waver from that,” he said.

“Are we gonna get creative? Absolutely. As I mentioned, we just can’t as a province keep doing the same thing and expecting a different result.”

Earlier this week, Health Minister Sylvia Jones said the government is looking at all options to improve the health system, sparking fears of further privatization. She later said what is not under consideration is asking people to pay out of pocket for services currently covered by OHIP.

Emergency departments across the province have closed for hours or days this summer due to a severe shortage of nurses. It has affected smaller rural hospitals more than larger urban ones.

Ford said his government is talking to health-care experts across the sector in an effort to figure out how to solve the staffing problem. But he and Jones have not specified what options they are looking at.

“If there’s a way of delivering better publicly funded health care, we’re gonna do it,” he said.

The premier pointed to a private hernia surgery clinic that was grandfathered in when the health-care system became public as a good example of how the private sector can help.

“They’ll bleed staff away from our public hospitals and urgent care centres, making the health-care crisis much worse,” she said in a written statement.

“If private surgery clinics accept your OHIP card for your procedure, they bill you for your room, the painkillers you take, your meals, the physical therapy you need and more.”

Parts of health care are delivered by private companies, including many long-term care homes and nursing agencies. Hospitals have been using nursing agencies more and more during the staffing crisis, health-care officials say.

“Why is it that my hospital, for example, has at least three private agencies providing nurses every day to our hospital at a premium that’s costing the hospital more than they’ll have to pay our nurses?” Warner said.

“It’s costing them sometimes double or triple the amount to pay these private companies.”

Warner said some agencies are charging $110 per hour plus HST for a nurse.

Cathryn Hoy, the president of Ontario Nurses’ Association, a union that represents more than 60,000 nurses and health-care workers, said some agencies are now charging hospitals more than $200 per hour, nearly four times what they charged before the pandemic.

Ford said there was little he could do about the situation.

“I can’t control per se the private sector,” he said when asked if it was price gouging.

Ford’s news conference on Friday was briefly disrupted when he swallowed an insect while answering questions from reporters.

“Holy Christ, I just swallowed a bee,” he said after coughing. “I’m good. He’s down here buzzing around right now. He has a lot of real estate!”

– with files from Allison Jones and Noushin Ziafati.

Banner image: Premier Doug Ford responds to a question from the media on the final day of the summer meeting of the Canada’s Premiers in Victoria, B.C., on Tuesday, July 12, 2022. The Ontario premier said Friday he’s a strong believer in public health care, but his government is going to “get creative” when looking at how it could be delivered in an effort to solve the staffing crisis in hospitals. THE CANADIAN PRESS/Chad Hipolito