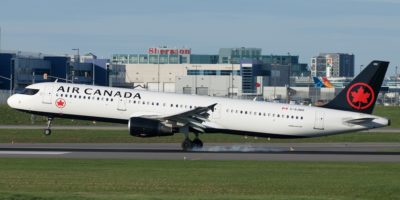 One traveller is warning others after taking a serious hit on a cancelled Air Canada flight.

Laura Bodnik reached out to Barrie 360 with concerns over Air Canada’s cancellation policy. She says she booked a flight to Las Vegas back in November. The flight was to have taken place April 5th, but was subsequently cancelled as a result of the COVID-19 pandemic. Laura was assured she would receive a flight credit instead of a refund on her credit card. The amount charged by Air Canada was $1,199.96.

Laura decided to put those credits to good use on a trip to Los Angeles this November, and that’s where the problems began. “The amount of the flights we were looking at were $1,195 CAD, so it was within the dollar amount that we had with our credit,” Laura told Barrie 360. “Air Canada then told me that we would still owe $214 CAD to book the flights because the flights we were booking were more than the credit we had,” After what Laura describes as two hours of questioning over the phone, she discovered she’d been given a total credit of $936, a whole $263.96 less than what she expected.

“I didn’t feel that was right since the flight never took place, so I should receive 100% dollar value of what I paid them. I gave them $1,199.96, so that is what they should give me back to spend on new flights, but that isn’t the case,” she said.

Barrie 360 reached out to Air Canada to address these concerns, but have not received a reply. The Air Canada website states a flight cancelled due to COVID-19 is beyond the control of the airline, but adds the remaining value of your ticket can be kept for future travel. It only adds that cancellation fees are being waived but makes no mention of other fees or taxes applied, even through refunds.