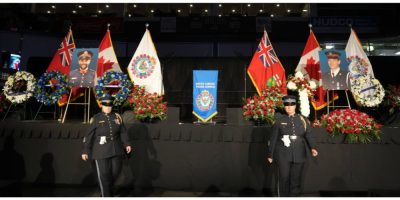 Const. Morgan Russell was there as Const. Devon Northrup interviewed for the job that kick-started his policing career, sitting on the panel that hired the younger officer six years ago.

The two constables – Russell, a mentor and veteran member of the force, and Northrup, who “would turn out to be just like Mo” – were both courageous, dedicated and passionate about their jobs.

Losing both of them after a shooting at an Innisfil, Ont., home last week dealt a devastating blow to the South Simcoe Police Service, colleagues said as they remembered the two officers at a joint funeral on Thursday.

“They showed respect to every single person that they came into contact with. These admirable traits are now their legacy.”

Both officers were skilled, funny and kind, Thomas and several colleagues said.

Russell, 54, had worked for the force for 33 years. He passed over promotional opportunities and stayed on the job past retirement age out of his love for front-line work and a desire to spend time with his family, Thomas and others recalled.

Northrup, 33, was with the force for just six years before his death but he left his mark, Thomas said.

Russell and Northrup were shot dead while responding to a disturbance call at an Innisfil home. The province’s police watchdog has said neither officer drew their firearms before they were shot.

Their families recalled the day they sent their loved ones off to work for the last time.

Const. Annie Romard, Northrup’s spouse, who also serves in the small police force north of Toronto, recalled dancing in the kitchen with her partner that morning before saying goodbye, and texting throughout the day about their plans to see each other that night.

“As always, before one of us walked out that door, we said: ‘Stay safe,'” she said. “Little did either of us know our lives would be changed forever.”

Other speakers remembered Northrup and Romard as a perfect match with complementary senses of humour.

Northrup came from a policing family – parents Ron and Heather, retired RCMP officers, spoke to their “unbelievably painful” loss of their son who had dreamed since high school of becoming a police officer, and loved spending time with family, friends and on his hobbies related to fitness and cooking.

Marisa Russell, the widow of Const. Morgan Russell, recalled him hugging their family goodbye, before later getting the news that they had “lost our source of strength.”

“We were so lucky to have Morgan as a part of our family unit for as long as we did,” she said, remembering him as a front-line officer who took risks to protect community safety.

Friends remembered Russell as a disciplined officer who knew the right thing to say to help people, a quality he brought to his work as a trained crisis negotiator. Northrup worked with the community mobilization and engagement unit and served as a member of the mental health crisis outreach team.

Flowers and portraits of Russell and Northrup were on display at the venue where thousands listened with rapt attention, some wiping away tears throughout the service. Folded Canadian flags and police caps were placed on top of the caskets before pallbearers carried them out later in the afternoon.

Lt.-Gov. ElizabethDowdeswell, who opened the service with remarks about the two men, said she had spoken to their colleagues about reflections that “leave no doubt that they were admired, valued and will not be forgotten.”

The deaths of Russell and Northrup mark three officers shot dead in Ontario in a month after the fatal shooting of Toronto Const. Andrew Hong in Mississauga, Ont., in mid-September.

Dowdeswell noted the string of deaths, saying the recent weeks have been “a devastating time for police and emergency services.”

“Perhaps we don’t say it often enough: thank you,” she said.

Premier Doug Ford, who became emotional at times as he spoke at the funeral, also noted the recent losses among police.

“We have seen too many days recently when these heroes didn’t return from their shift. That hits home,” Ford said.

“This police family will endure …. You will do so with two guardian angels smiling down on you.”

The funeral also came two days after RCMP officer Const. Shaelyn Yang was fatally stabbed in Burnaby, B.C., during an altercation at a homeless campsite. Yang was a mental health and homeless outreach officer.

Earlier Thursday, uniformed officers lined the streets outside the arena to salute the funeral cortège as it passed. Community members also gathered at the side of the road to watch the procession and pay respects.

Officers from Toronto, South Simcoe, York Region, and Barrie police services along with hundreds of RCMP and other police force members joined the morning procession as it moved through snowy Barrie streets.

In Innisfil, a group of residents gathered at the main worship room at a local church to watch a livestream of it.

Pastor Susan Burston said the church wanted to open its doors to offer community members a place to gather after the tragedy.

“It’s a small community, and everyone wants to be able to come together,” she said after the service. “You didn’t have to know them to be incredibly touched by what happened today.”

Gord Wauchope, a former mayor of Innisfil and a former police officer, said he was “heartbroken” watching the service. The loss hits especially hard in a small police force, he said, and in a small community where people all know each other well.

“It’s going to take a long, long time to heal from this,” he said.