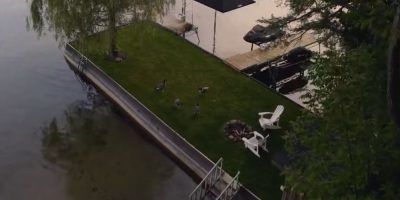 They are both revered and hated.

Distinctly Canadian, and a distinct pest, landing on waterfront properties destroying grass, and leaving their ‘calling card’, behind.

Homeowners have used dogs to chase them away, and some have lined their waterfront with pinwheels to keep them at bay. Sybil Taylor at Landscape Defense Systems in Barrie has found success using artificial intelligence (AI) to ambush them safely.

“We have a discreet, precisely targetted ambush that uses artificial intelligence to detect, and then deter, winged intruders. Cameras equipped with computers take multiple pictures every few seconds, then analyze those images to see if it’s a goose, not a person, not a pet, and then it sets off a water cannon which scares the geese away.”

Taylor told Barrie 360 it takes about three seconds from the time the system recognizes a goose until it activates the sprinkler, and about six seconds before the geese fly away.

It’s been quite a learning experience.

“Initially, we thought our cameras were going to have to be infra-red night vision, but we learned that geese actually don’t stay on shore at night. Their enemies are coyotes and weasels, so they actually stay on the water in flotillas, and most of them sleep. They have sentinels that will wake the rest of the group if there’s danger. So, you know, our system really basically works from dawn until dusk.”

Installations to date have been primarily residential, but they have been testing it on golf courses. And, if you already have a sprinkler system in your yard, it can tap into that. It can also be installed on decks and docks.

And, listen to our podcast, What Barrie’s Talking About.