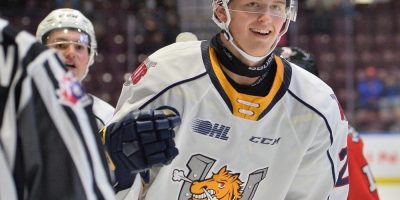 When it comes to Canada at the World Junior Hockey Championships, anything less than a gold medal is seen as a disappointment.

Those may be some pretty heavy expectations, but Canada doesn’t have the market cornered on the “win or bust” mentality at worlds.

The focus will also be squarely on winning gold for him and his Swedish teammates when the tournament opens on Boxing Day in Edmonton and Red Deer.

“Hockey is big in Canada, but here the world juniors is a big thing as well,” said the 19-year-old, who represented Sweden at last year’s championships. “Anything but gold is unacceptable here. It’s the same in Sweden.”

And then Olausson laughs out loud.

“Every year,” he said

Recently though, Sweden hasn’t been coming close to matching those expectations back home. The traditional hockey powerhouse hasn’t won a gold medal since 2012.

They won bronze at the 2020 championships and a silver medal in 2018, but it’s been a decade since they have been on top of the junior hockey world.

Olausson knows for the Swedes to have a chance at winning the tournament veterans like himself must play key roles.

The six-foot-one, 180-pound winger is looking to have a bigger impact than his first taste of worlds last year when he went scoreless in four tournament games.

Olausson, who was a first-round pick (28 overall) of the Colorado Avalanche in the 2021 NHL Entry Draft, wants to be someone Sweden will be able to depend on for scoring.

“I hope so,” said Olausson, who turned heads when he scored three goals with the Avalanche in NHL pre-season play. “I want to help the team more than I did last year.

“Help them in any way I can on and off the ice. I’m looking forward to that.”

Olausson continued his torrid scoring pace with the Colts after being sent down by the Avalanche. The talented forward scored seven times in his first six OHL games.

Though he’s cooled off somewhat of late with only one goal in his last six games with the Colts before heading to worlds, Olausson is happy with his decision to come to Barrie.

It’s helped him adapt to the North American style of game.

“It’s been good working hard and playing on the small ice,” said the Stockholm native, who has 12 goals and 13 assists for 25 points in 22 games with Barrie. “It’s different hockey on the small ice, so this is new to me, but it’s helped my game.”

Olausson admits he’s a little nervous heading into the worlds, but says he’s mostly excited. Like most Canadians, he grew up watching the tournament and dreamed of representing his home country.

“It’s amazing to play for Sweden,” said Olausson, whose family will be watching him back in Sweden. “It’s my home country and it’s going to be fun.”

“It’s an amazing atmosphere and I’m looking forward to that,” he added.

Olausson hasn’t forgotten the experience he had in camp with the Avalanche and remains determined to make the jump to the NHL.

His ability to go around or through defenders makes him tough to stop, but it’s bringing that consistently night-in and night-out that will get him to the next level.

He grew up admiring Swedish native and former NHL star Peter Forsberg and wants to emulate his ability to play with grit and not be afraid to go anywhere on the ice to get the puck.

“I want to be better like that,” Olausson said of Forsberg’s game. “He’s tough and he’s a guy who can score, so yeah I’m trying to be like that every day.”

It’s been quite a year for Olausson. He gets drafted into the NHL, shines in camp with the Avalanche, and has become a key player on a Colts team looking to make a run.

A gold medal with Sweden would put a nice bow on it.

“I’m thankful so much for just playing hockey and the things that have happened, but you always want more,” he said. “I just want to play and have fun out there.” Olausson and Sweden open preliminary play against Russia on Boxing Day (Dec. 26).