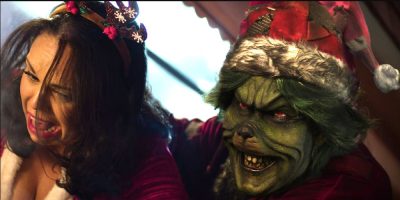 The Grinch will be doing worse things than just stealing presents and committing identity theft this holiday season.

The classic Dr. Suess story of the Christmas hater turned Christmas lover has been turned into a slasher film.

Titled “The Mean One,” it takes place in a town called newville.

The synopsis reads: The Mean One is a hairy, green-skinned grump in a Santa suit, living on a mountain high above the town of Newville, despising the holiday season. Young Cindy You-Know-Who, whose parents were butchered by The Mean One 20 Christmases earlier, is returning to town to seek closure… but is about to discover that this fiend with a heart two sizes too small is still quite eager to carve the roast beast.”

The film stars David Howard Thornton as the Mean One and Krystle Martin as Cindy You-Know-Who.

It hits streaming services for free on December 15.

“The Mean One” comes on the heels of another childhood classic that got butchered.

Recently an adaptation of Winnie the Pooh, “Blood and Honey” was released.

It showed a feral Pooh Bear and Piglet going knife happy after being abandoned by Christopher Robin.

XYZ Films has acquired the new holiday-themed parody slasher 'The Mean One' where the Grinch goes on a Christmas killing spree. https://t.co/PMNSYLC6Iu