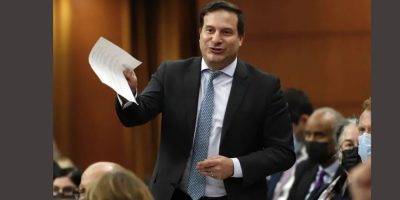 A national freeze on importing, buying, selling or otherwise transferring handguns is a central feature of firearm-control legislation tabled Monday by the federal Liberals.

The measure does not ban handguns outright, allowing current owners to continue to possess and use them, but seeks to cap the number already in Canada.

“This is a concrete and real national measure that will go a long way towards keeping Canadians safe,” Prime Minister Justin Trudeau told a news conference in Ottawa.

The bill would also allow for the automatic removal of gun licences from people who commit domestic violence or engage in criminal harassment, such as stalking.

The bill would create a new “red flag” law allowing courts to require that people considered a danger to themselves or others surrender their firearms to police.

The government says the measure would guard the safety of those applying through the process, often women in danger of domestic abuse, by protecting their identities.

The Liberals also say they will require long-gun magazines to be permanently altered so they can never hold more than five rounds, as well as ban the sale and transfer of large-capacity magazines under the Criminal Code.

However, the new bill arrives amid intense debate about gun safety on both sides of the Canada-U.S. border following an elementary school shooting that killed 19 children and two adults in Uvalde, Texas, last week. Earlier this month, 10 Black people were gunned down at a Buffalo, N.Y., supermarket.

Trudeau said Monday that people need to feel free to go to a store, birthday park or picnic without worrying about gun violence, but unfortunately the problem has deepened in Canada over the years. “We need only look south of the border to know that if we do not take action firmly and rapidly, it gets worse and worse and more difficult to counter.”

Mendicino has already tabled regulatory amendments in Parliament to ensure the national freeze on handguns can be implemented swiftly, the government said Monday.

“These regulations will help stop the growth of personally owned handguns in Canada and are expected to come into force in fall 2022.”

The number of registered handguns in Canada increased by 71 per cent between 2010 and 2020, reaching approximately 1.1 million, according to federal statistics. Handguns were the most serious weapon present in the majority of firearm-related violent crimes between 2009 and 2020.

Under the government’s plan, chief firearms officers would be prevented from approving the transfer of a handgun to individuals. Businesses could continue to sell to other businesses, such as movie companies and museums, as well as to exempted people.

Exempted individuals would include those who transport valuable goods and elite sport shooters who compete or coach in handgun events recognized by the international Olympic or Paralympic committees.

The government had previously pledged to work with provinces and territories that wanted to ban handguns, an approach that drew criticism from some firearm-control advocates as a blueprint for an ineffective patchwork of regulations across Canada.

Toronto Mayor John Tory welcomed the proposed handgun freeze as a “step in the right direction.”

“Gun violence is a national problem requiring national solutions,” he said. “Toronto city council has been clear that it supports a national handgun ban.”

The bill was generally applauded by groups advocating stricter controls, including PolySeSouvient, the Coalition for Gun Control and Canadian Doctors for Protection from Guns.

NDP public safety critic Alistair MacGregor said his party wants to believe the announcement is an urgent priority and not just another political stunt.

“If the Liberals are finally serious this time, New Democrats are here to get this done,” he said in a statement. “We are committed to addressing gun violence and making our communities safer.”

Two years ago, the government announced a ban on over 1,500 models and variants of what it considers assault-style firearms. The Liberals plan to introduce a mandatory buyback program to offer compensation to affected owners and businesses.

The government promised Monday to make sure such firearms are automatically prohibited when they enter the market in future. “We will continue working to ensure any new weapons that fit the definition of assault-style weapon are captured.”

The buyback plan has won praise from gun-control advocates, but Conservative MPs and others opposed to the idea have suggested it targets legitimate gun owners rather than preventing illegal firearms from falling into the wrong hands.

Several women’s groups recently implored the government to do away with the “red flag” provision, a version of which was included in the bill that didn’t pass last year.

The groups said it downloads responsibility for gun-law enforcement from authorities onto others, including possible targets of violence.

“Citizens or other organizations, much less potential victims, should not be expected to put themselves at risk by going to court to request action that should be immediate and within the direct responsibility of police,” their letter said.

The government appears to have acknowledged the concern by allowing the identities of vulnerable people to be shielded during the court process.

Samantha Price, who was shot in the hip at age 17 during a 2018 shooting spree along Danforth Avenue in Toronto, was among those who attended the Ottawa news conference Monday.

Price said she was “very happy” with the announcement, adding it would “help us feel safer.”

“You want to feel safe in your own community.”

Banner image: Minister of Public Safety Marco Mendicino rises during Question Period in the House of Commons on Parliament Hill in Ottawa on Thursday, May 12, 2022. THE CANADIAN PRESS/ Patrick Doyle

— With files from Marie Woolf