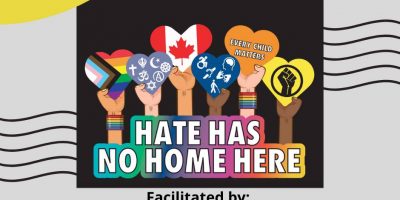 Barrie residents are being urged to make a statement by purchasing #HateHasNOHomeHere lawn signs.

“This side project actually was brought to our attention by one of our Facebook group members who had seen this particular sign on social media elsewhere and was wondering how she could get a copy of it,” says Nikki Glahn, founder and chair of Barrie Families Unite (BFU).

BFU was able to source the graphic designers of the particular sign who are based out of Oakville and they have made the files available for anyone to use as long as it is done on a cost-per-unit basis.

Glahn believes the sign symbolizes that everybody in the community is here to support each other.

“We’ve been hit a couple of weeks in a row with some serious and sad news that has come out of some communities in Canada, from British Columbia to here in Ontario,” she points out.

“Some people may say that a sign isn’t enough. But to that, I would say that while it isn’t everything, it definitely helps to share a message. It helps to promote hope and bring some sense of possibility.”

A mass grave containing the remains of 215 children, some as young as three-years-old, was found at the former Kamloops Indian Residential School in British Columbia in May.

Earlier this month, a family out for a walk in London, Ontario was struck by the driver of a pickup truck. Four people were killed and a nine-year-old boy was injured. Police allege the driver targeted the family because they were Muslim.

With every confirmation email when a sign is ordered, the individual will be sent contact information about these different communities in Barrie that are represented on the sign and how they can get involved.

The 18 x 24 signs are printed on both sides and will come with an “H-Stand” for use on front lawns, and they are light enough to hang in apartment windows.

BMO Financial Group is collaborating with BFU to be the distribution/pick up points for the signs. When you order, you will have the option to pick one of the following BMO branches for pick up:

The public can also order signs through the Barrie Families Unite website.