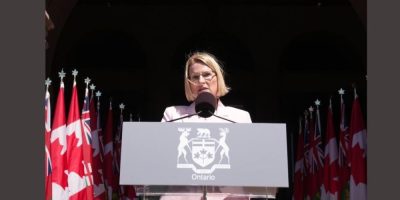 Ontarians will not have to pay out of pocket for health-care services, the province’s health minister said Thursday, a day after she came under fire for refusing to rule out further privatization in the system.

Sylvia Jones was pressed on the issue during question period, as the Opposition raised concerns over the government’s response to the health-care crisis that has seen emergency departments in several hospitals close for hours or even days this summer.

“No, no, no, OHIP cards are used in the province of Ontario to fund publicly funded health-care systems — that will continue under our watch,” Jones said in response to a question by Interim NDP Leader Peter Tabuns.

On Wednesday, when asked if there could be further privatization of the province’s health system, Jones said “all options are on the table.”

When asked to clarify her comments after question period Thursday, Jones did not rule out the possibility that private corporations could have more of a role in delivering public services, which already happens in some areas of Ontario’s health-care system.

“We should not be afraid of innovation,” she told reporters. “We’ve done it well in the province of Ontario and I want to continue to encourage that innovation because it means at the end of the day, people are going to get better service. I don’t want the status quo.”

She did not, however, provide an answer when asked if private surgical companies could be involved in addressing the backlog in surgeries created by the COVID-19 pandemic.

Large parts of Ontario’s health-care system are already privatized, including many long-term care homes, as well as home care and nursing agencies.

Advocates have said the emergency department closures that have been a recurring problem in recent months are largely due to nurse staffing shortages, with many health-care workers leaving the system entirely. Smaller rural hospitals have been particularly affected by closures.

She said the province is considering a wide variety of changes to address the hospital staffing crisis, but has not specified what those changes could be.

Tabuns said Jones is opening the door to two-tier medicine.

“Did she say that we won’t have expansion of private healthcare in Ontario? No, she didn’t say that, she would not say that and people should be angry about that,” he said.

Tabuns said if a private company were enlisted to help with surgeries, for example, there would be a knock-on effect to the public system, leaving it vulnerable to losing more health-care workers to those private companies.

Hoy wants to see the government scrap wage-limiting legislation for public sector employees. That would help the field retain and attract new nurses rather than lose them to the private sector, she said.

There are hundreds of unfilled nursing jobs in many hospitals, she said, which then forces those hospitals to turn to nursing agencies to backfill those positions in the interim.

She said those agencies are charging hospitals four times the going rate for a registered nurse.

“That is an abuse,” Hoy said. “It is an abuse of health-care dollars and it is abuse of the people of Ontario because we’re the ones paying the bill.”

Hoy said internationally trained nurses need to be licensed to work in the province, but even if that process gets sped up, there is a lack of veteran nurses left to help train them in hospitals.

Last week, the province sent directives to the College of Nurses of Ontario and the College of Physicians and Surgeons of Ontario, urging them to make every effort to register internationally educated nurses and doctors as fast as possible.

Banner image: Sylvia Jones, Deputy Premier and Minister of Health takes her oath at the swearing-in ceremony at Queen’s Park in Toronto on June 24, 2022. Ontario’s health minister is emphasizing today that people in the province will always be able to access health care without paying out of pocket, a day after she came under fire for refusing to rule out further privatization in the system. THE CANADIAN PRESS/Nathan Denette

This report by The Canadian Press was first published Aug. 11, 2022.