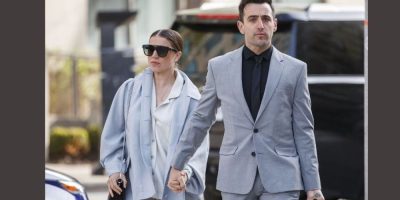 Canadian musician Jacob Hoggard is a risk to the public, the prosecution said Friday at the Hedley frontman’s sentencing hearing for sexually assaulting an Ottawa woman, while the defence pointed to a psychiatric report that said he was a low risk to reoffend.

The Crown wants Hoggard behind bars for six to seven years while the defence is seeking a three-to-four year term.

Crown attorney Kelly Slate said a psychiatric report completed after the trial shows Hoggard has not shown any remorse and has not taken responsibility for his actions.

“Because (Hoggard) is not acknowledging any responsibility, the Crown’s position is he could put himself in this position again,” Slate said, “and that he’s a risk to the public.”

The 2016 sexual assault took place in a Toronto hotel room. The Ottawa woman told the hearing last week that what happened will haunt her for the rest of her life.

Hoggard had also been charged with sexual assault causing bodily harm in the case of a teenage fan, as well as sexual interference involving that complainant but was found not guilty on those offences.

The 38-year-old Hoggard had pleaded not guilty to all charges.

His lawyer, Megan Savard, said the psychiatric analysis performed by Dr. Hy Bloom, a forensic psychiatrist, concluded Hoggard had a low risk to reoffend, was not a sexual deviant and not a psychopath.

Court heard that Bloom found that Hoggard’s celebrity played a large role in his pursuit of sexual conquests — that the musician had sex with about 200 people in his life and “60 to 70 per cent would be fans of Hedley.”

The band fell apart after the allegations against Hoggard surfaced in 2018.

“What Dr. Bloom found is that this is a man who is capable of personal growth,” Savard said.

“It does contextualize his behaviour, instead of a big question mark of is this a serial sexual predator and we have positive evidence that is not the case.”

But the Crown said Bloom’s report should be given little weight in sentencing. Slate pointed to Bloom’s own admission in the report on its limitations — primarily that he relied on interviews with Hoggard, his wife, family and friends and no interviews with the victim or any of the musician’s previous girlfriends and sexual partners.

Slate said the sentence should be well above the normal three-to-five year range for several reasons, including the violent nature of the sexual assault.

“On numerous occasions Mr. Hoggard overpowered and held (her) down against her will and that repeated violence for sexual gratification lasted over a period of hours,” said Crown attorney Jill Witkin.

Court previously heard Hoggard met the woman through Tinder and two weeks later arranged for her to travel to Toronto to meet for sex in a hotel room.

But once inside the room, the woman told court, Hoggard “became a completely different person” and a “complete psychopath.”

The woman testified Hoggard raped her repeatedly, choked her, called her a “dirty little pig” while he made animal noises and dragged her to the bathroom where he asked her to urinate on him and she said no.

She said she thought she was going to die while being choked.

Hoggard later told Bloom he maintained his innocence after the jury’s verdict came down, saying the encounter was consensual. The woman testified the entire incident from start to finish was not consensual.

“The Crown’s position is the lack of remorse and not taking responsibility for his actions limits his potential for rehabilitation,” Slate said.

Hoggard will also be given an opportunity to address the court, though he is not obligated to do so.

The sentence is expected to be delivered on Oct. 20.