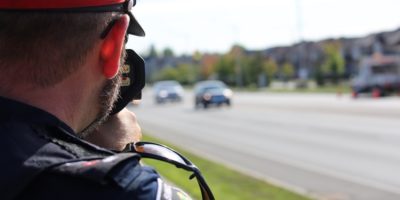 A Barrie man is up on Stunt Driving charges during a police school zone safety blitz in Innisfil.

Just before 9:00 this morning, an officer was out and about, monitoring the traffic flow in front of Cookstown Central Public on King St, when a vehicle is said to have approached at a high rate of speed. The vehicle was clocked at 55km over the posted limit in a school zone.

A 32-year-old Barrie man was charged, while his licence was suspended on the spot, for seven days. His vehicle was also impounded for a time.

Meanwhile, South Simcoe Police say a RIDE check in Bradford Saturday morning yielded a charge of Cannabis Possession. Police say a 17-year-old man was found to be in possession of pot, while the law says you have to be 19 to do so. A roadside test showed the young man was not driving under the influence.