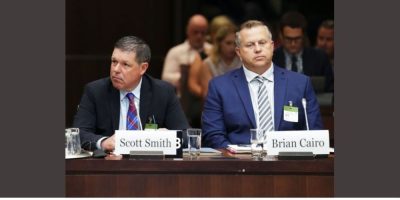 Hockey Canada says it has paid out $7.6 million in nine settlements concerning sexual assault and sexual abuse claims since 1989, with $6.8 million of that related to serial abuser Graham James.

The figure does not include the undisclosed amount of a settlement with a woman who sued the organization this spring.

The hockey governing body has been under fire since it was revealed the money in its multimillion-dollar National Equity Fund — which had been reserved for uninsured payments — comes from player fees.

Another 12 insured claims have cost Hockey Canada $1.3 million, and the organization’s chief financial officer, Brian Cairo, said $1 million of that is related to four complaints about the same alleged perpetrator, although he did not provide details.

Insurance companies were not willing to insure the organization for payouts related to the James case after it became public, which is why the organization needed to set aside a fund for uninsured payments, Cairo told the House of Commons heritage committee Wednesday.

“This money was used to support the victims, not the perpetrator.”

The fund was also used to pay for the services of a law firm that has been investigating the alleged sexual assault that has Hockey Canada officials before the committee of MPs this week.

In May, news broke that members of the 2018 world junior team were accused of a group sexual assault after a Hockey Canada gala event in London, Ont.

The heritage committee is now probing how the governing body dealt with the allegations and the lawsuit.

Cairo said the equity fund has paid out money in 11 more cases that are not related to sexual abuse. That includes Brad Hornung, who suffered a severe spinal cord injury during a WHL game in 1987 and became a paraplegic.

Hockey Canada president Scott Smith provided clarity Wednesday about four incidents Hockey Canada has reported to Sport Canada, the federal department. He told the committee that includes the 2018 case and the recently revealed allegation of a group sexual assault committed by members of the 2003 world junior team in Halifax.

Smith said the remaining two investigations are not sexual abuse claims, and involve a family that has been prevented from enrolling its children in hockey programs because of the father’s conduct.

Witnesses including Cairo, Smith, and Glen McCurdie, the organization’s former vice-president of insurance and risk management, were before the committee Wednesday. At the request of Conservative MP John Nater, all were sworn in and testified under oath.

McCurdie told the committee that when he learned of the allegations on June 19, 2018, he was golfing with Hockey Canada’s insurance brokers and told them informally about the situation hours before he made a report to London police.

He said that he made a formal insurance report the next day, and that he had several phone calls with other Hockey Canada officials on June 19 about the allegations.

Police investigated and did not lay charges, but the woman at the centre of the allegations sued Hockey Canada, the Canadian Hockey League and eight unnamed players for just over $3.5 million this spring.

Hockey Canada settled the case, but the sum is not included in the $7.6 million figure as it has yet to be fully tabulated.

Smith told the committee the organization chose to use the National Equity Fund because an insurance claim could take months or years, and that Hockey Canada could still put the claim through insurance after the fact.

Cairo said Hockey Canada did not offer to pay the complainant from the equity fund before the lawsuit, as it didn’t know the details of the allegations and it wanted to respect her privacy.

Dan McKenzie, president of the Canadian Hockey League, said his organization was not involved in settlement discussions — although it was named in the lawsuit and signed off on the settlement. He also said the CHL sought advice after the settlement because it did not think it should have been a party to the claim.

McKenzie told the committee that the 22 players on the 2018 world junior hockey team were “under the jurisdiction of Hockey Canada” at the time of the gala, as the CHL season had ended. He said they had all signed professional contracts and that only two of them returned to the CHL the next season.

Smith was pressed by Liberal MP Anthony Housefather about why the case was settled so quickly and whether Hockey Canada properly informed the eight players who were also defendants. He said it was “highly unusual” to settle within weeks, but Smith said that was done in the best interests of the complainant.

Hockey Canada has reopened its independent investigation into the case. The law firm handling it says it has interviewed the complainant and plans to speak with nine players who were at the event and were not interviewed in the initial investigation in 2018.

Cairo said Henein Hutchinson LLP has been paid $287,000 for its investigation so far, also from the equity fund.

Meanwhile, Sheldon Kennedy, an advocate for sexual abuse survivors and one of James’s victims, has called on Hockey Canada’s leadership to resign as a result of their handling of the allegations.

There was cross-partisan support for that sentiment from MPs Wednesday.

New Democrat MP Peter Julian said the public has lost confidence in Hockey Canada. “I think it’s fair to say that Hockey Canada simply has not stepped up…. Canadians have been let down.”

“There needs to be a bigger cultural change in Hockey Canada than you’re currently promising,” Housefather said.

Smith said an ongoing governance review may determine he is not the best person for the job, but for now, “I believe that I’m the right person to lead Hockey Canada to a new place.”

This report by The Canadian Press was first published July 27, 2022.