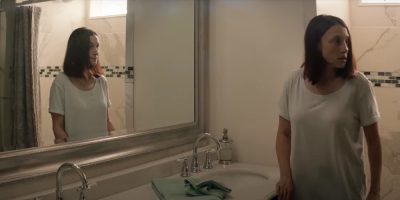 Horror and Halloween go hand in hand, and if you ask Gena Shaw, she feels right at home being terrified.

The New Jersey actress and director has been in show business for 23 years, appearing in movies, tv shows, and commercials.

Her experience has taken her through several genres, but her clear favourite is horror.

She’s appeared in scary productions like ‘Creepshow,’ ‘Love in a time of monsters,’ and ‘Insomnium,’ to name a few.

“Honestly, if I did horror movies for the rest of my career, I would be the happiest person on the planet,” she says happily.

Shaw’s currently promoting her new film, “A Savannah Haunting,” and although she’s filmed several scary movies and shows before, this one is different.

It was filmed in an actual haunted house!

“It’s the family home of our writer and director, William Mark McCullough.”

“He decided to write a film based on his experiences growing up in that house. So, shooting in the actual haunted house was a trip.”

The home, located near Savannah, Georgia, is still in his family today.

“This one closet was very long and narrow, and it was in the most haunted room in the house that we all gravitated towards,” she recalls.

“They were shooting downstairs, and I was upstairs, sitting in the closet on the steps by myself with my back against the door. I hear ‘dawng dawng dawng’ like three heavy knocks on the door, and it hit me three times in the back.”

“So, I jumped up and opened the door. Nobody’s there. But someone hit that door three times; I would swear my life on it.”

When Shaw confronted the crew, she found out no one had been in that area.

“I said, ‘no one was upstairs?’ And they said, ‘no, no one’s been upstairs.’ So, I think a ghost was trying to get into the room.”

The creepy experience does nothing to change her love for working on horror films.

“What I love about horror is you can play around in the unknown. The rules are different than in your regular old movie.”

“Plus, I love the gore factor and blood and guts. You can do a horror, campy comedy; you can do a monster thing. There are just so many different areas that you can explore within one genre.