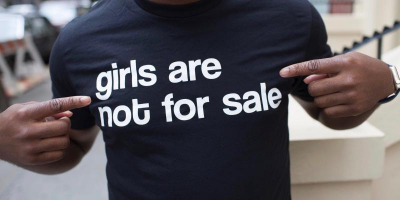 Katarina MacLeod can’t function some days. Bedtime means the expectation there will be nightmares.

MacLeod still suffers the fallout from being a victim of human trafficking.

Now 48, she is executive director of Rising Angels, an agency based in Peel Region that offers education and support services to women from across Ontario that have been lured into sex work.

MacLeod said there is no place in Ontario where human trafficking isn’t happening.

“I have seen a lot of it happening in Barrie and Simcoe County,” MacLeod told Barrie 360. “where I have girls from that area that I have been mentoring who have been trafficked all across Ontario, but that is where they originate from.”

MacLeod’s story is one that nightmares are made of. Abuse at the age of two, raped by different men, pregnant at 14 and married at age 17 to a man who was very abusive. Her husband was killed by another man while he was staying at a halfway house. MacLeod met a woman who ended up owning a massage parlour and she was recruited in at 21 years of age.

“The drama and trauma I had left me very vulnerable,” explained MacLeod.

It took her 15 years to get out. In that time, she worked hotels, strips clubs and out of her car, and even had two children with a pimp.

“When I got out I wanted to tell the truth. I wanted people to understand that it wasn’t a choice.”

February 22 is Human Trafficking Awareness Day in Ontario. For the first time, the day is being marked nationwide after parliamentarians unanimously passed a motion last week.

Laura Simonetta is on the frontline of the trafficking scourge.

Simonetta is Director of Counselling with Youth Haven, which provides services and programs in Barrie, Orillia and Simcoe County to youth who are experiencing homelessness or at risk of becoming homeless.

“I can honestly tell you that all of my employees are involved with different committees regarding human trafficking and the issue in those specific areas,” said Simonetta. “We are seeing more and more of it as time goes on.”

One of the biggest things they are seeing in the region now is phone calls from young women seeking different types of support.

“Most of the time they are not even aware about what sexual exploitation is,” said Simonetta. “They’re thinking they are having a relationship issue or these are things they are struggling with, when in reality, they’re being trafficked.”

Representatives from Youth Haven sit on committees with other community partners to discuss human trafficking, and there is also the work that is being done in local schools.

“We are going into a lot of high schools to educate not only young people in our communities but also parents. The education piece is huge.”

Simonetta said a lot of people don’t think the trafficking of girls is a local issue.

“It’s terrifying,” said Simonetta, “as young as 12-years-old we’ve heard in our area.”

Not all girls who get lured into human trafficking come from broken homes. In fact, MacLeod deals with young women on a regular basis who at school were excellent students and participated in after-school activities.

“These traffickers are pulling the boyfriend scenario, the Romeo pimp,” said MacLeod. “They’re finding everything out they can about these girls and they’re starting to build an emotional connection in a relationship, and these girls are falling for it. They really believe it’s their boyfriend.”

Quite often girls who are rescued from human trafficking get pulled back in. It’s a giant whirlwind.

MacLeod shared the story of a young girl who was befriended on Facebook by a guy.

“Facebook, unfortunately for these young kids, they think the person is just a friend,” she said.

The girl was invited by this man to a party where she was drugged and raped, and the event was videotaped. MacLeod said the girl was told if she didn’t work for them the video would go viral.

MacLeod said all of this is especially concerning during COVID when more kids are spending time online.

Both Simonetta and MacLeod urge parents to be aware of what their children are doing on the internet.

“We had a 15-year-old girl,” said MacLeod, “who was being trafficked for six years and living in her home. Her parents had no idea.”

“She would go to work, supposedly, every day at Tim Hortons. It was really her traffickers. They had threatened to kill her family. She was so terrified she didn’t reach out for help or tell anybody.”

Traffickers often use major highways to transport their victims across Ontario, according to provincial police. That is what makes Barrie a stopover destination along Highway 400.

To alert the public about human trafficking, the Ontario Provincial Police will be using billboards along Highway 11 in Muskoka to help spread awareness to passing motorists. The billboards will feature comments made by human trafficking victims, highlighting how normalized they believed their situation may have been. The campaign also encourages members of the public to utilize the hashtag “KnowHumanTrafficking.

“We are starting to educate employees at hotels about what kind of signs to look for and how they can assist if they are aware this is happening,” said Simonetta.

She said these girls that break free tell them they had no idea what was happening to them because they were so brainwashed.

What Simonetta and others who assist victims of human trafficking have found is that despite offering education and telling them that what’s happening to them isn’t okay, they get sucked back in because of the trauma they have endured.

“It’s constantly this back-and-forth cycle until hopefully, we can get them out for good,” she said.

“It takes a lot of effort with community partners and everybody being on the same page, and just being very patient with the whole process of it.”

The lacking of reporting by victims about what they have endured makes it even more challenging for police to find these traffickers, arrest them and then get a conviction.

“It’s unfair that the only way they can get convictions is if these girls come forward and testify,” said MacLeod. “That process alone is gruelling. I have sat in court with girls who have testified against their traffickers only to have the traffickers get six months or two months, even time served.”

According to Statistics Canada, of the 1,400 victims of human trafficking reported by police in Canada between 2009 and 2018, women and girls made up 97 per cent.

“This is happening in your area,” said MacLeod. “That’s what people have to understand.”