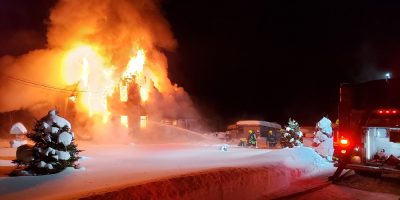 Limited access to water may have played a part in a Huntsville home being consumed by fire.

Huntsville/Lake of Bays Fire Department was called to a home on Domtar Road just before 10:30 p.m. Tuesday to find flames shooting out of the second storey of the house.

Frigid temperatures and limited access to water made it difficult for firefighters to get ahead of the blaze, according to the fire service that adds once tankers were brought in, fire crews began knocking it down.

Firefighters battled the blaze for three hours. Their efforts were complicated by the partial collapse of the home which made it unsafe for fire crews to get in. An excavator had to be brought in to create access to hot spots within the home.

Damage is estimated at $450,000, while the cause of the blaze has yet to be determined. There were no injuries reported as a result of the fire.