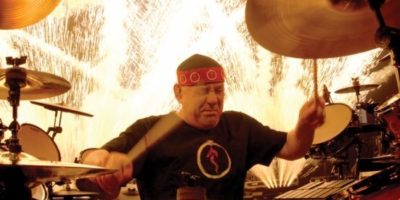 Fans of the Canadian rock band Rush are mourning the passing of Neil Peart, the group’s percussionist and chief lyricist, often called one of the greatest drummers of all time.

His death is even more hard-hitting for fans, as Peart was an extremely private person, despite the accolades around his musical and writing talents.

A family spokesman said the 67 year old died from glioblastoma, an aggressive form of brain cancer.

“It is with broken hearts and the deepest sadness that we must share the terrible news,” his bandmates Geddy Lee and Alex Lifeson said in a joint statement on Friday.

“(Our) friend, soul brother and band mate of over 45 years, Neil, has lost his incredibly brave three-and-a-half year battle with brain cancer.”

Peart sought musical fame shortly after his 18th birthday and left for London, England. The trip only saw him fall on hard times and he returned to work at his father’ farm equipment dealership. Peart grew up on a dairy farm near Hagersville. He was 13 when he began taking drumming lessons, inspired by the likes of The Who’s Keith Moon.

Peart also thrived with a pen in his hand, serving as the versatile main writer on such songs as the science-fiction infused “Tom Sawyer,” the potent social reflection “Subdivisions,” and power ballad “Closer to the Heart.”

It was a chance audition with unknown Toronto band Rush that piqued Peart’s curiosity. At that point, Lee and Lifeson were six years into the band’s history, and had already recorded their first album before original drummer John Rutsey decided to split.

Peart won over the pair, who brought him in to record 1975’s “Fly By Night.” It was the start of him writing most of the lyrics for songs that helped sell millions of records around the world.

But their fame didn’t come fast. It took several albums, including “A Farewell to Kings” (1977), “Hemispheres” (1978), and “Permanent Waves” (1980), which earned their first of seven Grammy nominations, before Rush started to solidify their reputation.

Several albums – “2112,” “Moving Pictures,” “All the World’s a Stage” and “Exit … Stage Left” – have sold more than one million copies each in the U.S. alone. They’ve received a career total of 10 Juno wins, including a Canadian Music Hall of Fame induction and a humanitarian award.

Peart’s backstage life was a mixture of fun times and deep focus.

In 1997, Peart and his bandmates became the first rock musicians to be inducted into the Order of Canada.

That same year, Peart lost his 19-year-old daughter Selena Taylor in a car accident. In 1998, his wife, Jackie Taylor, died of cancer.

In 2013, the band finally made it into the Rock and Roll Hall of Fame, which many fans felt was long overdue.

Rush embarked on a 40th anniversary tour in mid-2015 that wound up being their last. At the time Peart attributed it at least partly to chronic tendonitis and shoulder problems. Lee has since acknowledged that it might have come as a surprise even to the band themselves.

“Those wishing to express their condolences can choose a cancer research group or charity of their choice and make a donation in Neil Peart’s name,” the band added in their statement.