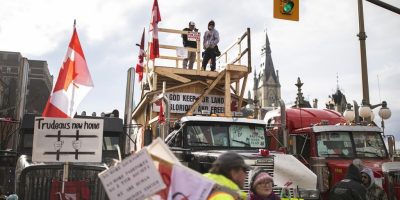 Prime Minister Justin Trudeau says everything is on the table to bring illegal blockades to an end — but he can’t say when that will happen because of fears of violence.

Trudeau says the people still illegally blocking streets in Ottawa and border crossings to the United States must go home or face increasingly severe consequences that could ruin their lives.

Ontario is moving to invoke a state of emergency so it can hike fines and introduce jail time for people refusing to leave the blockades.

That move comes two weeks after the first big rigs began snarling streets in downtown Ottawa and amid some clear tensions between the federal and provincial governments about who is responsible for solving the crisis.

Ontario meanwhile is refusing to participate in daily meetings the federal government set up with the city of Ottawa and provincial government this week in a bid to find solutions to the impasse.

This report by The Canadian Press was first published Feb. 11, 2022.