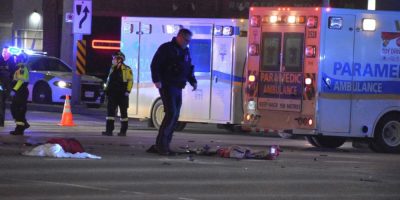 One of the three pedestrians struck by a vehicle in south Barrie on Thursday evening was an employee of Empower Simcoe, and the other two individuals receive support from the organization.

“While we’re shocked and saddened by this difficult news, our continued thoughts and support are focused on the families, our Empower Simcoe colleague, the people we support, and our entire Empower Simcoe community,” the agency said in a statement on Friday afternoon. “Our Empower Simcoe team is truly grateful for the support shown by the Barrie community.”

Police say the pedestrians were struck around 6:30 p.m. at Bayview Drive and Mapleview Drive.

The vehicle then struck two other vehicles, but no occupants from either were injured.

Police told Barrie 360 the pedestrians were on their way to the Barrie Colts hockey game when they were hit.

They have been identified as a 52-year-old female and two men, aged 44 and 53, all from Barrie.

All were taken to hospitals in Toronto for treatment.

A 32-year-old Barrie woman has been charged with impaired driving causing bodily harm.

Investigators from the Traffic Unit are asking anyone who may have witnessed the collision, or who may have dash camera footage from the area to contact police at 705-725-7025.