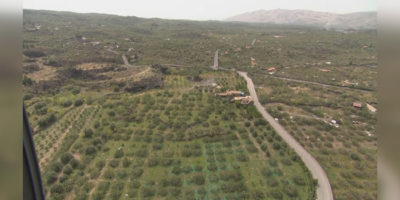 In the skies over Sicily, Italy’s paramilitary police force, the Carabinieri, is on patrol, protecting a product worth tens of millions of dollars.

“We do this kind of patrol, both with a helicopter or with ground patrols, to prevent the pistachio thieves,” said Captain Nicoló Morandi, who is on pistachio patrol.

After all, this is Bronte, a place famed for this flavorful nut, cultivated in the fertile shadow of Mount Etna.

Walking through pistachio trees, Giuseppina Paparo said, “It’s a unique forest on the desert of lava.”

Paparo’s family has been in the business for a good two hundred years. With a harvest only once every other year, two years of work come down to about 20 days.

Paparo said they have had problems with thieves in the past: “One, two times, some bad people comes with a gun.”

At the Paparo family farm, Aroma Sicilia, the labor-intensive picking, shucking and drying only add to the price. A small storeroom contains bags of dried pistachios worth about $33,000 – an appetizing target for thieves.

For at least five years during harvest time, the Carabinieri have been patrolling and setting up roadblocks. It’s working: no thefts reported this year.

When asked if he’d caught anyone red-handed, Captain Morandi replied, “Not this year, but in the past year, we did it. This year we catch three people that are trying to steal almonds.”

“Almonds! Oh no! There are more problems than just pistachios?”

Captain Morandi acknowledges there are more serious problems in Sicily, but here, this little nut is big business, earning the nickname “green gold” – green for its color, gold for its value. And as for an almond patrol? Stay tuned.