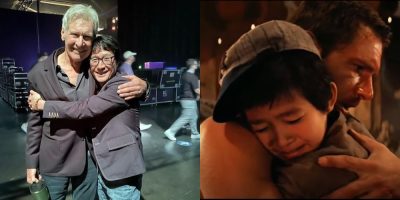 Indiana Jones and Short Round have reunited.

Ke Huy Quan was a kid when he starred in the first Indiana Jones Movie as Short Round.

He didn’t see his famous co-star Harrison Ford again until recently at the D23 Expo.

In an interview with the New York Times, Quan recalled seeing Ford for the first time since 1984.

“My heart is pounding; I’m thinking, ‘Is he gonna recognize me? The last time he saw me, I was a little kid.’ As I get closer, he turns and points his finger at me, and he has that classic, famous, grumpy Harrison Ford look.”

Quan told the publication, “When I wrapped my arms around him, all those wonderful memories I had on the set came flooding back. It felt so comfortable. It was amazing, and he’s an amazing man — one of the most generous men on the planet.”

Quan was featured in some large-scale movies in the 1980’s including ‘Indiana Jones and the Temple of Doom,’ and ‘The Goonies.’

His career eventually saw him work as a stunt coordinator and assistant director.

He recently returned to the big screen in the critically acclaimed film ‘Everything Everywhere All at Once.’

His next role will be in the second season of Disney’s ‘Loki.’