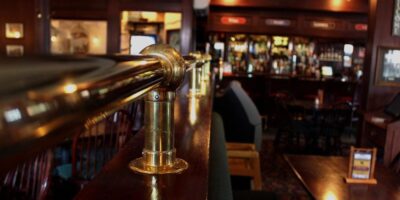 While there were a few folks inside the Bull and Barrel on Cedar Pointe Drive in Barrie over the weekend, the majority stuck to the patio. The sun might’ve been the reason why. Then again, it could have been COVID-19.

On Friday, Simcoe and Muskoka were among the regions permitted to enter into Stage 3 of the province’s framework for recovery from the COVID-19 pandemic. This meant, among other things, restaurants could offer indoor dining again, at a physically safe distance.

“I wasn’t sure exactly what to expect,” Yvette Wicksted, owner of the Bull and Barrel, told Barrie 360. “I’ve been told to expect that a third of my clientele won’t come back and a third will have some reservations about coming inside. And it looks sort of that way; the patio remained the busiest part.”

Wicksted figures, while the nice weather might have lead to a busier patio, it’s not the only reason. “When staff sort of did a brief little chat with everybody and find out why they were on the patio rather than coming inside where there was air conditioning that would keep them a little cooler, a little more comfortable, they felt maybe it was just a little too soon to go in, that they felt the patio is where they felt safer.”

That will likely remain the case, says Wicksted, until the patio is no longer an option. “That’s probably when I expect to see a bit of a change. As long as they can stay outside and feel safe, I think some will. Others will start to come in on their own. But once the weather changes, that’s when I think things will make a change.”

However, Wicksted was grateful to see a few of her regulars belly up to the bar indoors. And it sounds like they were grateful too. “What I heard almost as much is thank you for still being in business. We’re so happy that you’ve made it to this point to Stage 3,” she said. “You know what, I was quite heartened by that.”

“I was happy that we were able to get some business going again … with some trepidation, with the reduced capacity and, you know, the extra steps that everybody has to take.” Wicksted added she expects to be taking those added steps for quite some time.

“This is the long haul.”