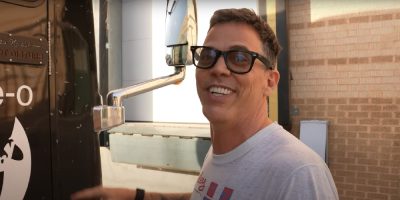 If you think you’re midlife crisis was bad, you have nothing on Steve-O.

The “Jackass” star is making further plans to get breast implants, and a penis tattooed on his forehead.

He’s pushing 50 years old and says these latest stunts are his way of mentally dealing with aging.

In an interview with the Guardian, he explained, “these ridiculous acts are an examination of my body and how, on the cusp of turning 50, the instrument I rely on for attention is breaking down.”

“Not only am I developing man t!T$, but I literally have under Boob too. And so, I’m childishly lashing out at the God that enabled me to develop man t!t$.”

As for the phallic tattoo on his forehead, Steve-O says it will draw attention away from his wrinkles.

“Clearly, a big D on my forehead is all anybody’s going to be able to see, so it’ll keep me young.” he jokes.

Don’t be too concerned about him; he admits these changes will be temporary.

A plastic surgeon has assured him the implants can be taken out after a few months, and eventually, the tattoo will be lasered off.

Although Steve-O has been talking about breast augmentation for a while, it seems like he is more committed now than ever to get it done.

These latest stunts will be part of his near future “Gone to far Tour.”

Steve-O is currently promoting his new book “A Hard Kick in the Nuts: What I’ve Learned from a Lifetime of Terrible Decisions.”