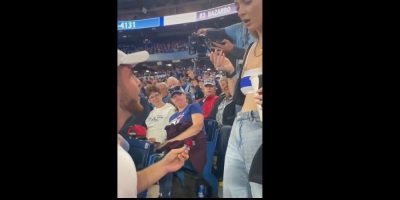 Proposing to your girlfriend is no joke, as one guy found out the hard way.

During the Blue Jays and Boston Red Sox game at Rogers Centre this weekend, one fan got down on one knee to propose to his girlfriend.

Her look of sheer happiness quickly turns when she sees him holding a Ring Pop!

Her reaction is pure contempt as she shouts, “What the f–k is wrong with you,” and she throws her drink in his face before storming off.

Rumour has it; he had a real ring to give her afterward, so the proposal was genuine. However, this is going to be a tough one to work out.

The video of the exchange has gone viral, but people are split on if the whole scene was genuine or staged.

Others think he was a total jerk for pulling such a dumb move, while others things she overreacted.

Either way, it’s cringy to watch.