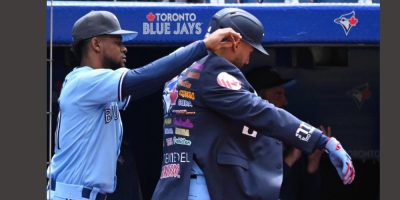 Lourdes Gurriel Jr. had a grand slam in the sixth inning and Teoscar Hernandez had a three-run homer the seventh as the Toronto Blue Jays rallied past the New York Yankees 10-9 on Sunday.

Toronto starter Yusei Kikuchi (2-3) gave up three runs on three hits and struck out five in four innings of work in a no decision. He walked two and hit two batters, as well as throwing one wild pitch.

Guerrero and Alejandro Kirk were already on base when Hernandez came to the plate.

He watched two change-ups from Peralta miss the strike zone and worked the count to 2-1.

The Yankees reliever went back to the same pitch and Hernandez took full advantage with a three-run shot just over the outfield wall for a 10-8 lead.

Rizzo pinch hitting for Higashioka in the eighth put a Mayza offering to deep right field to cut into Toronto’s lead.

Gonzalez got an infield single in the next at bat, followed by a single from pinch-hitter Jose Trevino to threaten Toronto’s slim lead.

That brought Blue Jays closer Romano to the mound with five outs to go. He got out of the eighth with a fly ball and a strikeout.

Romano rung up Donaldson to start the ninth, issued a walk to Giancarlo Stanton, and then forced Torres to flyout to centre.

Aaron Hicks singled to right field, but Romano of Markham, Ont., earned his 17th save of the season by inducing a Rizzo groundout.

Guerrero smashed the first pitch he saw in the first inning. He blasted Severino’s 94.9-m.p.h. four-seam fastball into the Blue Jays’ bullpen. His 17th home run of the season also scored Bo Bichette.

Torres countered for the Yankees in the second inning. His 13th of the season came on a full count and narrowed Toronto’s lead to 2-1.

Donaldson, who won an American League MVP award with Toronto in 2015, was loudly booed by the 44,395 at Rogers Centre with each at bat.

Those jeers were especially loud in the third inning as he rounded the bases following a two-run home run. His sixth of the season also scored Joey Gallo and gave New York the lead.

Aaron Judge tacked on a run in the fifth inning. He hit a double off of Cimber to bring in Gallo from second.

Cimber struck out the next two batters, but then gave up a hard double off the outfield wall to Torres, which scored DJ LeMahieu and Judge for a 6-2 Yankees lead.

Springer cut into that lead by one in the bottom of the inning. With two outs, he took the first pitch he saw to deep left field.

Castillo had a rough introduction to big-league pitching when he came on for the Blue Jays in the sixth inning.

Higashioka crushed a Castillo pitch 395 feet into the second deck at Rogers Centre for his fourth home run of the season and the first Major League at bat for Castillo.

In the next at bat, Castillo gave up a home run to Gonzalez for the Yankees to build an 8-3 lead.

Guerrero led off the sixth with a single to centre field, which was the first Toronto hit of the game that wasn’t a home run.

Although Guerrero was later tagged out by Donaldson at third on a fielder’s choice, his single sparked a Blue Jays rally.

Kirk followed Guerrero’s hit with a walk, followed by Teoscar Hernandez hitting into the fielder’s choice.

Santiago Espinal struck out, but Matt Chapman drew a walk to load the bases and set up Gurriel’s grand slam.

CASTILLO CALLED UP — Castillo was selected to the Blue Jays roster before the game. Righty Casey Lawrence was optioned to triple-A Buffalo in a corresponding move.

UP NEXT — The Blue Jays hit the road on Monday with José Berríos (5-2) getting the start in Chicago against the White Sox. Chicago counters with Lance Lynn, who began his season on the injured list and earned a no decision in his first start last week.

This report by The Canadian Press was first published June 19, 2022.