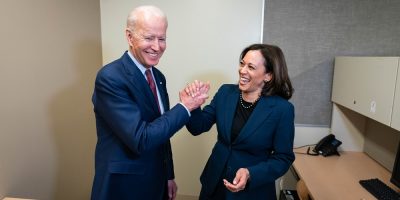 Former Vice President Joe Biden is projected to win the electoral votes needed to be declared the 46th president of the United States, narrowly defeating President Trump after a bitter campaign that exposed deep divides in a country still in the throes of a deadly pandemic.

CBS News projects Biden will win Pennsylvania, putting him over the top as votes continued to be counted four days after Election Day. Biden’s victory improved on Hillary Clinton’s 2016 performance among men, independents and new, young voters, exit polling showed, while Mr. Trump improved among non-White voters and his Republican base.

Mr. Trump captured several large battleground states that Biden had hoped to be competitive in, including Florida, Ohio and Texas.But Biden was able to win back Pennsylvania, Michigan and Wisconsin, states Hillary Clinton had lost in 2016.

President Trump and his campaign are trying to litigate their way to victory, vowing to take their disputes all the way to the Supreme Court. Mr. Trump falsely claimed victory for himself just hours after polls closed and portrayed counting of legally cast ballots as an attempt to “steal” the election. He repeated those claims in a White House briefing Thursday evening and in a series of tweets.

Bob Bauer, the head of the Biden campaign’s voter protection effort, said Wednesday that if Mr. Trump goes to the high court “he will be in for one of the most embarrassing defeats a president has ever suffered.”

At 78, Biden will also be the oldest man to ever occupy the Oval Office. On November 3, Biden was the same age — 77 years, 11 months, 14 days — as Ronald Reagan was the day he left office.

Biden’s campaign against Mr. Trump was largely about character. His motivation to run for president, he has said, came after Mr. Trump’s response to the 2017 white supremacist rally in Charlottesville, Virginia.

Since he kick-started his third presidential campaign in April 2019, Biden’s main message was also a warning: The country was in a “battle for the soul of the nation,” meant to underscore his belief that Mr. Trump was not only wrong on issues but a risk to democracy.

This battle took on new meaning after the Democratic Party consolidated behind Biden in March as the COVID-19 pandemic struck.

Stopping the spread of the virus, developing a vaccine, and rescuing the plummeting economy transformed the campaign’s message from one for the “soul” of the nation into another fight about how to save American lives.

In purposeful contrast with Mr. Trump’s mask-optional rallies, simple declarations from Biden like “I will listen to the scientists!” and “Wear a mask!” became some of the most popular rallying cries at his socially distanced campaign events.

Biden also did not shy away from the racial justice protests that erupted nationwide this summer after the deaths of Black Americans at the hands of law enforcement officers. He comforted grieving families and touted reforms like community policing, but not wide-scale “defunding,” as some protesters called for. And throughout his campaign, he also promised he would not “pour gasoline on the fire” of racial division, as he accused Mr. Trump of doing.

Biden’s poor performance in the early primary contests threatened to doom his presidential campaign until the Black voters of South Carolina saved his candidacy with an overwhelming win that set him on a path to the Democratic nomination. During the primary season, he was forced to confront policies he had championed, like the 1994 federal crime bill, impacted minority communities. But his long career and service under President Obama made him a known and trusted commodity for many, like House Majority Whip James Clyburn, whose endorsement helped Biden clinch his first primary win in South Carolina.

In an interview, Clyburn said he encourages Biden to be a “risk taker” in terms of priorities, policies and vision, even if it goes against his political instincts. “This country is worth the risk,” Clyburn said. “We are not asking him to take the risk, we’ll take the risk, you can come along for the ride.”

Campaign advisers said the focus on race in America was an important factor in Biden’s search for a running mate. In August, he chose Harris, a former prosecutor in her first term as senator from California. “This morning, all across the nation, little girls woke up, especially little Black and Brown girls, who so often feel overlooked and undervalued in their communities. But today, just maybe, they’re seeing themselves for first time in a new way — as the stuff of presidents and vice presidents,” Biden said of Harris. “Kamala knows how to govern. She knows how to make the hard calls. She’s ready to do this job on Day One.”

Together, the Biden-Harris administration has promised an aggressive agenda for their first 100 days in office. “Day One” priorities include rejoining the Paris Climate Agreement to combat the “existential threat” of climate change, and addressing immigration by sending a  bill to Congress to grant citizenship to the more than 1 million undocumented young adults in America known as “Dreamers.” On health care, citing potential long-lasting side effects millions may suffer from COVID-19, Biden has said he plans to push for a Medicare-like “public option,” which would build on the Obama-era Affordable Care Act.

President Trump polled better than Biden on the question of who would be better at running the economy, so Biden boasted about his support from labor unions and proudly wore his nickname “Middle-Class Joe,” even though he has become a wealthy man later in life. Biden promised to repeal the tax cuts passed by the Trump administration and vowed to not raise taxes on anyone making under $400,000.

Aware that passing his priorities will require working with both Democrats and Republicans in Congress, Biden promised a return to the bipartisanship seen as a relic of his Senate career that started in 1972.

One of “Joe’s jobs” is “making clear that people are welcome in the coalition even if you don’t agree with everything that we stand for,” Senator Amy Klobuchar said in an interview with CBS News. She also said opportunities for bipartisan Biden administration legislation are within reach, as in her private discussions “a number of [Republican senators say they] like him and they feel comfortable with him.”

The public rocky and personal moments of Biden’s 558-day campaign could strain this thinking, as gaffes from the notoriously unscripted politician went viral, his mental acuity was questioned, and dark and untrue conspiracy theories about him spread online. His family was also under scrutiny, mostly his son Hunter’s foreign work in Ukraine, which became a long-running focus of President Trump and his reelection effort. The president in December 2019 was impeached in the House over his request of the Ukrainian president to announce an investigation into the Biden family, which never materialized.

Yet in the campaign’s last days, Biden’s unity message still seemed intact, even if delivered from a social distance.