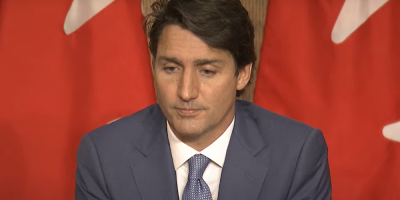 Prime Minister Justin Trudeau consulted premiers about using the Emergencies Act Monday, while an Ontario judge granted an injunction to enforce noise and idling bylaws related to the ongoing protests against vaccine mandates and other COVID-19 restrictions in Ottawa.

The injunction, which does not have an end date, was designed to give the police and bylaw officers an extra tool to enforce city bylaws, lawyers acting for the city of Ottawa said Monday.

The Attorney General’s office intervened in the court hearing to make it clear that the injunction would also apply to federal property in Canada’s capital city.

The protest by antigovernment demonstrators blockading city streets around Parliament Hill is now in its third week and has spread to several Canada-U.S. border crossings.

Trudeau will appear at a news conference at 4:30 p.m. on Monday alongside Deputy Prime Minister Chrystia Freeland and Justice Minister David Lametti. They were to be joined by Public Safety Minister Marco Mendicino and Emergency Preparedness Minister Bill Blair.

Trudeau met with his cabinet for an urgent meeting Sunday night and is on a phone call with provincial and territorial premiers today.

A source aware of the planned conversation, who spoke on the condition of anonymity because they were not authorized to discuss the matter publicly, confirms the prime minister was to talk to the premiers about using the legislation as the Emergencies Act’s criteria requires.

The Emergencies Act allows a government to invoke temporary measures, including barring people from gathering or travelling to certain locations, to protect national security, public order and public welfare.

It has never been used before. Trudeau consulted the premiers about using it in the early days of the COVID-19 pandemic nearly two years ago, but has said repeatedly it was not needed because the powers to address the pandemic were already in place.

The Emergencies Act replaced the War Measures Act in 1988 and is more limited in what it can do, including requiring parliamentary oversight. All measures invoked under the Emergencies Act must also comply with the Charter of Rights and Freedoms.

The War Measures Act was used three times, including in both the First World War and Second World War, and during the FLQ crisis in Quebec in 1970.

This report by The Canadian Press was first published Feb. 14, 2022.