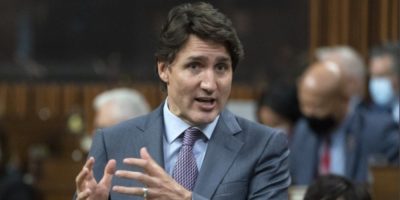 Speaking at a news conference on Monday, Trudeau condemned the actions of China toward Canadian planes that were taking part in a multilateral UN mission over the Pacific Ocean to enforce sanctions against North Korea.

“China’s actions are irresponsible and provocative and we will continue to register strongly that they are putting people at risk while at the same time not respecting decisions by the UN,” the prime minister.

Last week, the Canadian military accused Chinese planes of not following international safety norms on several occasions and putting a Canadian crew at risk. A statement said the Chinese planes tried to divert a Canadian long-range patrol aircraft from its path, and that the crew had to change direction quickly to avoid a potential collision.

“Such interactions … are of concern and of increasing frequency,” the statement said.

The Canadian plane was deployed from April 26 to May 26 to join other countries in watching for fuel transfers between ships at sea that could be helping North Korea evade U.N. sanctions over its missile and nuclear tests. Chinese ships are suspected of taking part in the transfers. The U.S. and Japan have also participated in the surveillance.

China defended its military pilots on Monday, saying they acted properly and were protecting its sovereignty, following recent complaints by Canada and Australia that Chinese planes engaged in risky manoeuvres with their aircraft over the Pacific.

Wu said in a statement that Canada has stepped up close reconnaissance of China under the pretext of implementing UN sanctions. He said Canada would bear responsibility for any serious consequences from what he called its risky and provocative acts.

“China’s buzzing of a Canadian Forces plane over international waters is reckless and unprofessional,” Chong said.

A 2001 collision between a U.S. surveillance plane and a Chinese air force jet resulted in the death of the Chinese pilot and the 10-day detention of the U.S. aircrew by China.

In a separate incident, newly elected Australian Prime Minister Anthony Albanese, on a visit to Indonesia on Monday, called the May 26 actions of a Chinese fighter jet a dangerous act of aggression against an Australian air force plane conducting aerial surveillance in the South China Sea.

The Chinese J-16 accelerated and cut in front of the Australian plane, releasing chaff with small bits of aluminum that was sucked into the latter’s engine, Australian Defense Minister Richard Marles said Sunday.

China’s Defense Ministry has not commented on the incident.

Foreign Ministry spokesperson Zhao Lijian said the Chinese military always conducts operations based on international law and practice and in a safe and professional manner.

“We urge Australia to respect China’s national security interests and major concerns, and to be cautious with its words and deeds so as to avoid a miscalculation that could cause serious consequences,” he said.

China claims numerous small islands and reefs in the South China Sea, and says the area around these outcroppings are its territorial waters and airspace. The waters are an important shipping lane for all countries in the region, including Australia, which along with the United States says it wants to ensure freedom of navigation through them.

Zhao said China would not allow any country to violate its sovereignty in the name of freedom of navigation.

He also accused Canada of spreading disinformation and said it should adopt a moderate and pragmatic policy toward China and take concrete steps to improve relations between the two.

This report by The Canadian Press was first published June 6, 2022.

With files from The Associated Press