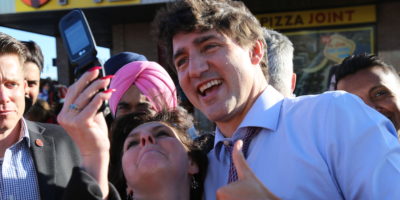 It was an Aladdin costume and not a skeleton in the closet that came to roost over the past 40 days of our federal election. The photos and one video of Justin Trudeau dressed in an Aladdin costume wearing racist makeup was perhaps the largest political earthquake this time around. Those 40 days have come to an end and now the results of the 2019 Federal Election are in.

It seems the blackface scandal and the SNC-Lavalin debacle were not enough to rock the boat completely ashore. The next federal government will be a minority Liberal government with Trudeau at the helm.

Leading up to Monday night, Justin Trudeau repeatedly attacked the Conservatives on climate change, which he called “the defining issue of our time.” Conservative Leader Andrew Scheer called Trudeau a fraud and a phony for firing the first indigenous Attorney General [ Jody Wilson-Raybould ] for doing her job.

Green Party Leader Elizabeth May also repeatedly went after Trudeau over his handling of the SNC-Lavalin affair saying she hoped to God that the Liberals don’t get another majority government. And NDP Leader Jagmeet Singh declared they would form a coalition government to keep the Conservatives from taking power.