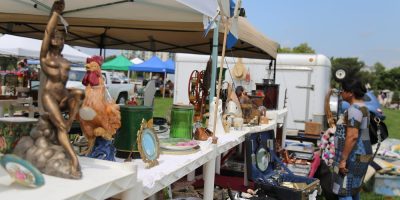 It was two years in the making, and Kempenfest’s 50th Anniversary did not disappoint.

Festival Chair Todd Tuckey told Barrie 360 the organizers were pleased, and the vendors and festival-goers had nothing to complain about. “Some of our arts and crafts vendors sold out Sunday morning, like roughly 20 of them…which was amazing because they had stocked extra for this year, expecting a good comeback. Talking to the food booths, they have done amazingly well, the beer garden, and the bands, [it] has been just great!” Vendors who sold out their products were happy to take orders to fill.

“Festivals and Events Ontario, they’re saying that the average attendance [at such festivals] is up 20 per cent this year, over any regular year. And we’re finding we’re at least that here. And the average expenditure is up over 30 per cent.”

The best part, says Tuckey, is after two years they have something to give back to charities in the community. “One thing people don’t understand is Kempenferst itself is a charity. We’re all not-for-profits that own and run Kempenfest. So, there’s no nobody sitting at the top, you know, taking in money from this event or anything. All the profit we make goes back into our community. So, it’s great to see the community support.”

Even as the tear-down was beginning Monday night, the collective minds of Kempenfest were still turning, looking back over the last three days, reviewing their notes on what went right, and what went wrong, in anticipation of next year’s festival. Tuckey says there will be a complete review, “What can we fix? What can we improve? And that happens within a couple of weeks of the event ending.”