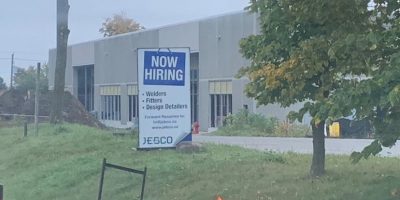 Drive around the City of Barrie and you will see billboards advertising jobs, especially in the manufacturing and hospitality sector.

At a Tim Hortons in north Barrie, there is even a sign at the drive-thru speaker advertising positions.

Patrick Poulin, Group President of Randstad Canada, a staffing agency and human resources services company, says there is a labour shortage that’s not unique to Barrie but is affecting employers worldwide. He says the demand is way higher than what there is to offer in terms of labour in the market right now.

He says there are particular sectors that are really struggling to fill positions.

“When you look at construction, for sure,” Poulin says. “Healthcare and the IT sector are in a big shortage right now. The retail and hospitality industry is still looking to find people. Unfortunately, many firms had to let go of their employees and now those employees have found other jobs.”

He says they were seeing some labour challenges in 2019 before COVID, and it has increased significantly through the pandemic.

Some critics have said the Canada Emergency Response Benefit (CERB) and other government aid programs during COVID have not been an incentive for some people to look for work.

Poulin doesn’t deny there are some programs in place that are not influencing people to come back to work, but says it’s not the only reason.

“I have seen studies in the U.S., and I assume they are pretty much similar to what we are living in Canada, that even if programs weren’t in place, and even if immigration was the same as it was before, we would still face a huge shortage in terms of labour.”

While it’s perfect timing to look for a job, Poulin says it also has put pressure on employers.

“They need to build-up their strategy to make sure their brand and what they need to offer to the market is highly competitive.”

Poulin says for workers, the attraction is more than just salary.

“Of course, salary is always the first thing that attracts people. But after that, the reputation of the company is really important and what it is like to work for a specific company, like holidays and how well they treat their employees. In this specific context that we’re living in right now, we see this as a new template.”

Randstad operates in Barrie, and on its website says it’s a leading force in connecting job searchers with employers, most notably in the fields of industrial support, skilled trades, and administrative support.