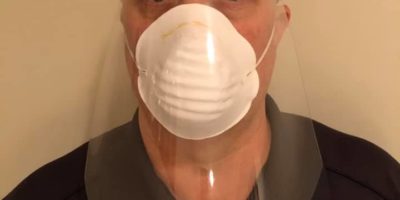 With the ice breaking up on area waterways, Craig Goulding should be thinking about the upcoming boating season. But like everything of late, COVID-19 has interfered with those plans.

The owner of Canadian Yacht Tops (CYT) in Lefroy admits his business is going to take a hit. Looking for a way to generate income to keep his staff working and to give back, Goulding decided to retool to produce face shields.

Canadian Yacht Tops makes most of its money producing canvas boat top, boat upholstery and flooring. The company also dabbles in the production of snow gear, handlebar bags and other items.

With two small shops and approximately 2,000 to 2,500 square feet of room to work with, Goulding said most of the work they do, in particular boat tops, is done by hand. He had to find efficiencies and to make the lay out more like an assembly line.

The company invested in computer machinery to start becoming digital. The materials used for boat tops is being used in the production of the face shields. However, the cost to make the masks is more expensive.

CYT has a staff of six full time and 2 part time employees but Goulding hopes to roll out 250 to 500 face shields a day. Some people have reached out on Facebook asking whether the company will be hiring more staff. At the moment that isn’t on the table.

“Because of our square footage I want to keep everybody at a safe distance. I have done in-house with staff,” said Goulding. ” It is what staff is comfortable with. I want the staff to be safe. To bring in an extra five staff is a dream or a want, but at the end of the day I want to keep everyone safe.”

While mass production is just getting ramped up, word is out that CYT, at least for now, has set sail with a new product.

The company has applied to the Ontario government to get the shields medically approved and has received confirmation that it’s in the pipeline.

“Nurses from a Toronto hospital reached out and placed an order for 40 face shields.” said Goulding.

He said as a small business owner he has to make money but CYT also added a few extra shields to the nurses at no charge.

A construction company has made a purchase of shields for its workers and Goulding has also heard from a Children’s Aid Society, an aircraft mechanic in Owen Sound and a dentist.

While thinking about the future of his business, Goulding is grateful he has found a way to retool to produce personal protective equipment, to keep his staff employed and hopefully keep people safe while on the job.