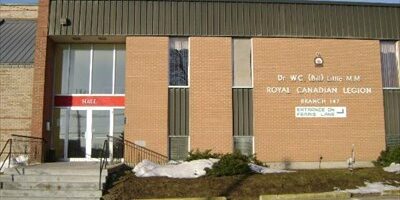 When Crystal Cook looks over the financial landscape of the 39 Royal Canadian Legions she is responsible for, the District E Commander is not at a loss for words as to how the grim the situation is.

“The branches in District E are holding their own but we have a few that are in jeopardy of closing if things don’t turn around in the immediate future because finances are dwindling.”

District E covers most branches in Simcoe Muskoka as well as a couple in the Greater Toronto Area and Dufferin County.

With the forced closure on March 17 because of the pandemic, most branches lost valuable income that would have sustained them. Money-makers such as hall rentals for weddings and dances, as well as Legion sports leagues like euchre, pool and darts.

“All of these things are vital to our survival as they provide the funds we need to keep the doors open and to be here to help or veterans and our communities.”

Many branches in District E did not qualify for financial assistance the federal government released. Cook said it’s because a lot of the branches are run by volunteers so they were not eligible for any assistance and those that have paid staff didn’t have a payroll large enough to qualify. In Cook’s District, only two legions received funds from the Canadian Emergency Business Account (CEBA).

Cook said the loss of money has forced branches to think outside the box to do anything to survive. Many have set up GoFundMe accounts, others have held bottle drives, virtual pampered chef parties, just to name a few. In several communities, residents have made financial donations and organized their own bottle drives.

Now that the province is in Stage 3 of reopening the economy, most branches in District E will resume some business, though Cook notes most will be open fewer days and for fewer hours until they can evaluate if they are getting enough support from members and the community to continue to operate.

Legions across the country are feeling the financial pinch and some may have to shut their doors for good.

“Legion branches across Canada provide essential services to veterans and their families in need,” said Cook. “Canada-wide, our branches distribute close to $20 million each year to help veterans and communities. The funds donated by Canadians through the Poppy Campaign cannot be used for operational needs. Our branches also help Veterans Affairs Canada with benefit applications.”

Cook said there is more than just a loss financially. There are veterans who used the legion as their daily outing and many feel very alone and cut off.

“Our branches have been good about reaching out to veterans with regular phone calls and dropping off care packages and groceries, even doing lawn visits.”

“We are hopeful they are in fact putting together something to help the branches. I am hoping that by the time they release it that it isn’t too late for some of our branches.”