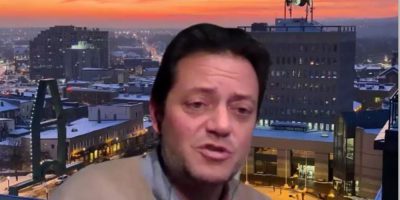 Taking a cue from comedian and TV actor Gerry Dee, Barrie Mayor Jeff Lehman offered to sit in on virtual classrooms over the last couple of weeks, talking to students about what he does, and taking their questions.

@Mayor_Jeff thank you!! This was such a positive for our students! 😊 https://t.co/kKwYF5miKw

He’s done it before, but not on this scale, “I’ve been doing class visits for 11 years. I mean, typically it’s, you know, maybe one a month for an hour.”

“I did a grade seven class, and the questions were about climate change, homelessness, downtown. Why did I get into politics? What would you suggest for somebody who’s interested in politics? Awesome, awesome questions,” said Lehman. ” And, you know, we hear from a 12-year-old or a 13-year-old, in their own words, saying, ‘This is why climate change is really important to me, or housing, or finding a good job.’ We listen because it makes an impact. I mean, that’s, that’s who we shouldn’t be doing this for anyway.”

Older students, says Lehman, were the ones asking about COVID. How long is it going to last? Is Omicron going to last months or weeks or whatever? A few asked about the government’s handling of it, and if he knew a year ago, what he knows now, would he have handled things differently, “I had to sit back and think about that for a moment. There are certainly things that I would have done differently, things we would have gone faster at sooner. I’ll give you an example. There’s still this belief that wiping surfaces is going to protect people from COVID. That’s not how it transfers. It’s airborne…so we were subjected to that early on because nobody knew that. Of course, we were doing all this enhanced cleaning on buses and all that sort of thing, when what we should have done is get masks for everybody, and put up Plexiglas around the driver from, you know, day one.”