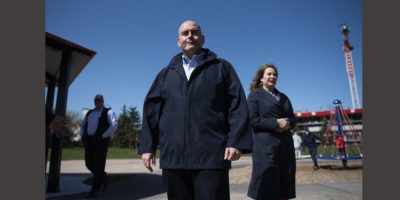 A Liberal government in Ontario would count on a renegotiated federal child-care deal and “efficiencies” in procurement to pay for promises that include affordable housing, subsidized transit and an end to for-profit long-term care, the party revealed in a costed platform released Monday.

The Liberals would also draw money from existing contingency funds, which they noted the auditor general has described as “overly cautious,” if they vault from their third-party status to government in June.

“We are the only party in this race right now that has both a coherent plan that targets what the people of this province need, and we’ve also attached responsible and fair and balanced numbers to our plan,” Liberal Leader Steven Del Duca said at the platform’s launch in Toronto.

“It’s actually a real plan, unlike the Ford Conservatives’ budget that had no coherent plan whatsoever,” he said. “And the people of Ontario are still waiting for numbers from Andrea Horwath and the NDP about their commitments.”

The Liberals said they would balance the budget in 2026-27 if elected, although Del Duca said the party would make room for “unforeseen circumstances” and wouldn’t compromise on health or education investments.

The party expects $2 billion of its projected funds for programs would be covered by a renegotiated child-care deal with the federal government.

It wasn’t immediately clear how the Liberals would reopen that deal, but Del Duca said he has “a great deal of optimism and confidence” that Ottawa would play ball, even though the agreement was signed earlier this year and only allows for renegotiation in Year 3.

If it doesn’t work out that way, Del Duca said, his government would dip further into its contingency funds to pay for $10 before- and after-school care — one of the big promises made by the Liberals.

The Tories’ budget — which was not passed before the legislature adjourned ahead of the election campaign and is serving as the party’s platform — contained $19.4 billion budgeted over three years for contingencies in “other program expenses.”

Another $2 billion in their plan would come from what the party described as a new “procurement efficiencies strategy.”

“We’ll ensure any money spent by the provincial government and the broader public sector meets a value-for-money test by improving public procurement through more co-ordinated, transparent, fair and easy-to-navigate systems,” the platform reads.

The party said those systems would make it easier for the province to accept bids — “including unsolicited ones” — from small and medium-sized Ontario businesses.

The party also revealed the housing plank of its platform, saying it would reinstate rent control and build 1.5 million new homes – also key promises from the NDP.

The platform also details the Liberal pledge to end for-profit long-term care, which the party says would cost $50 million this fiscal year, $150 million in 2023-24, and $200 million in each of the following two years.

As part of their plan for sustainable growth, the Liberals are promising to cut the cost of transit rides across the province to $1 until 2024 – set to cost nearly $1.9 billion over two years.

On the health-care front, the party is promising to hire 100,000 health-care workers and train 3,000 new mental health and addictions professionals.

It is also pledging to clear the diagnostic and surgery backlog with a $1-billion investment and establish maximum wait times for surgeries.

For post-secondary students, the Liberals are promising to double funding under the Ontario Student Assistance Program and give “significantly” more grants while also eliminating interest on provincial student loans.

The party would also provide free tuition for early childhood education college programs and forgive all student loans for nurses, paramedics and other health-care workers on the front lines of COVID-19.

The Progressive Conservatives painted the Liberal platform as unrealistic, calling it “nothing more than a back of the napkin Liberal ‘stretch goal’ littered with costing holes.”

“We all remember the 15 years of Del Duca-Wynne Liberals, who raised taxes, killed jobs, and jacked up hydro rates to the highest in the entire country,” Tory spokeswoman Gillian Sloggett said in an emailed statement.

The New Democrats, meanwhile, suggested the Liberals would leave Ontarians in the lurch.

“Under Del Duca, the Liberals are again in a race with the Conservatives to balance the budget at the expense of investments desperately needed to help save people money — like making sure you’re covered for mental health, dental care and prescription drugs,” the party said.

Here are some key promises:

– Balance the budget by 2026-27, though making room for “unforeseen circumstances.”

– Increase the minimum wage to $16 an hour in January then develop regional living wages.

– Provide 10 paid sick days for all workers and study a four-day work week.

– Remove the provincial portion of the HST from prepared foods under $20.

– Introduce a surtax of one per cent on corporate profit above $1 billion.

– Provide up to $9,500 in rebates on purchases of electric vehicles.

– Increase Old Age Security by $1,000 per year for eligible seniors.

– Clear the diagnostic and surgery backlog with a $1-billion investment.

– Enroll anyone without an employer benefits plan in a portable benefits plan, including self-employed, gig and contract workers.

– Invest an additional $3 billion in mental health and addictions services and lift the cap on new Consumption and Treatment Services sites.

– Forgive all student loans for nurses, paramedics and other health-care workers on the front-lines of COVID-19.

– Cut carbon and methane pollution by more than 50 per cent by 2030, transition to a fully clean energy supply, ban new natural gas plants and phase out reliance on them.

– Expand the Greenbelt and designate 30 per cent of Ontario land as protected, up from 10 per cent.

– Eliminate corporate taxes for two years for businesses most impacted by the pandemic.

– Use ranked ballots for the next provincial election, and allow municipalities to use it, and explore other voting changes such as lowering the voting age.

Banner image: Ontario Liberal Leader Steven Del Duca and his wife Utilia Amaral walk through a park as they speaks to supporters before a campaign event in Ottawa, on Saturday, May 7, 2022. THE CANADIAN PRESS/Justin Tang

This report by The Canadian Press was first published May 9, 2022.