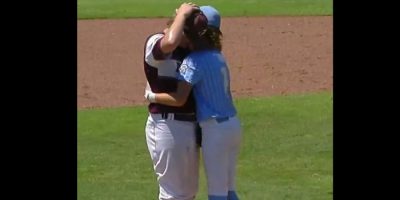 What could have been a bad day on the baseball field turned into a sweet moment between opposing players at a Little League World Series game.

An Oklahoma player was struck in the head while hitting and fell instantly. The ball caught him on the side of the face, just below his helmet.

Once he regained his composure, he saw the pitcher, from Texas East, was incredibly shaken up by the incident.

The Oklahoma player then walked over to the pitcher, and the two had a heartwarming hug, letting each other know they were okay.

The coach also gave the players a pep talk.

Have a look at the video.

Oklahoma little leaguer gets hit in the head and then comforts the pitcher who is shaken up afterward pic.twitter.com/hYYLiy511K