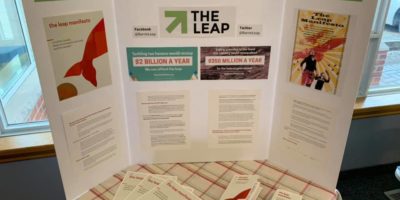 A local grassroots organization is looking to get louder as the federal election campaign gets longer.

Leap Barrie was formed a couple of months ago to push the conversation locally about a more caring and fair economy for everybody.

“The concept is to work to reduce our emissions considerably through a bunch of ideas from investing in low-carbon work such as health care, child care and teaching to ending fossil fuels subsidies and things of that nature.”

Speers says he was inspired by reports we have until 2030 to reduce emissions by more than half or we’ll hit a tipping point.

“This might be our last chance to fix things”

Speers admits there are still a lot of skeptics about the impact of emissions and climate change, but he senses the tide is turning.

He hopes his group can turn the tide some more.

Speers says opposition to what Leap is doing is from people who think its approach will cripple the Canadian economy.

Leap believes if you decide to take the action necessary, workers displaced
can be retrained to do something else…something more sustainable…more green.

He is speaking tonight at Living Green Barrie’s Climate Action Event at 7 pm at the Uptown Theatre.