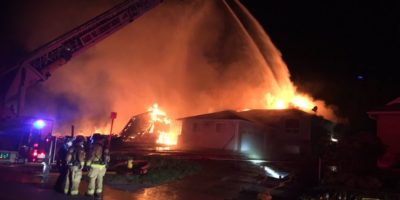 Barrie firefighters remain on scene of a blaze eating away at several structures – some under construction – on Edgehill Drive between Ferndale Drive and Jagges Drive.

At one point, a ruptured gas meter caught fire turning into what fire officials say was something akin to a blowtorch. gas company experts had to be called to turn off the supply of gas.

One firefighter was take to RVH with an ankle injury; there were no civilian injuries.

The flames were reported by a passerby just before midnight.

The Office of the Fire Marshal has been called in to investigate. Damage may exceed $2-million.