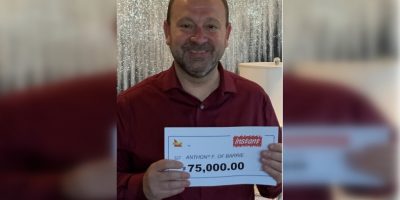 Persistence has paid off for a Kitchener woman – and her son.

Every year, Anthony Firetto of Barrie would receive an Instant Lottery ticket from his mother.

This year, for his 56th birthday, she bought him an Instant Tetris ticket which he received and played during a visit with her. He wasn’t sure if he had actually won because it was his first time playing the game. While out for a walk with his mom, they stopped at a nearby retailer to check the ticket. “When the cashier checked it, all the bells and whistles went off on the lottery terminal. It felt surreal!”

Anthony says he’ll share the windfall with his mom and put some in the bank.