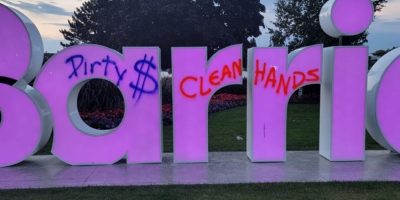 Coun. Mike McCann, who spearheaded the fundraising for the $200,000 sign and is running for mayor in next month’s election, wants police to investigate.

“I mean there should be a formal complaint,” McCann told Barrie 360. “If there is not, I will make that formal complaint. This has to stop. The boldness of this person or these people to deface a landmark sign.”

City council has put $15,000 on the table to be used annually for sign maintenance including the removal of graffiti.

Despite the graffiti, McCann says the Love Barrie sign is doing its job.

“It’s showing that Barrie is a loving city and that we care about each other,” McCann told Barrie 360 in a statement. “The philanthropists, council, and community have pulled together and made this happen. This has been a gigantic success and has been celebrated and will be celebrated for many years.”

“Every city has ugliness, and it’s disheartening when it shows up on something beautiful.”

As of 12 noon, Barrie police told Barrie 360 that there has been no formal complaint made about vandalism to the Love Barrie sign.

Eyebrows have been raised in some circles about the $200,000 price tag for the sign and how the Ward 10 Coun. has gone about fundraising for it, with donations collected by his Heart Barrie company.

At a council meeting on June 6 of this year, McCann disputed a staff memorandum that indicated Heart Barrie had raised $375,000 in donations. According to the donor list published by the City of Barrie on its website as of June 30, 2022, the tally is $370,000.

“Unfortunately, city staff published numbers that were not correct, and I believe I made that very clear in council because there were some in-kind donations,” McCann told Barrie 360 in a June 30th interview.

Asked what type of in-kind donations he has received, McCann said that could be for labour, advertising, and promotion. He says he let staff know the numbers were wrong, and they were published anyway, which McCann blames on miscommunication.

In that same interview, McCann told Barrie 360 that he believes he will have quite a large bank balance of between $80,000 and $90,000, which he indicated will go to the save the beaver and save the turtles program, as well as to charity.

“Everything is transparent,” said McCann.