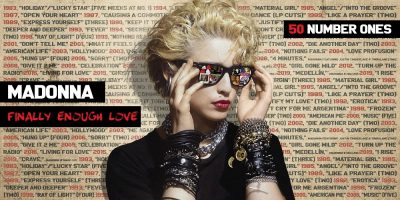 Madonna is celebrating her 40-year music career by releasing her best dance songs.

“Finally Enough Love: 50 Number Ones” Is filled with 50 of her number 1 dance hits and unreleased remixes, with each song being remastered.

It takes you through every era of her career.

The album is the first part of a series of projects she plans on releasing that highlight her extensive career.

The album drops on August 19; however, the 16-track digital edition will be available on June 24.

You can get a taste of the album by listening to the edited “Into The Groove” and You Can Dance Remix Edit” below.

There’s a new class of “Rock and Roll Hall of Fame” inductees.

Chairman of the Rock Hall John Sykes said that each inductee had a profound impact on the sound of youth culture and helped change the course of “rock ‘n’ roll,”

The latest batch was voted on by more than 1000 artists, music industry professionals, and historians.

Dolly Parton initially asked to be taken out of the running, saying she didn’t think she deserved the honour, but eventually accepted the nomination after being told the ballots were already mailed and it was up to the voters.

The induction ceremony will be held on Nov. 5 in Los Angeles.

Rebooted “Saved by the Bell” cancelled

After just two seasons, the rebooted “Saved by the Bell” has been canceled.

The news comes as a surprise, considering it won the award for Outstanding Comedy Series at the GLAAD Media Awards last month.

The show was also a hit with audiences and received good reviews.

Haskiri Velazquez, who plays Daisy posted on Instagram about the cancellation saying:

This show gave me a platform where I was able to be a positive representation for all the little LatinX girls out there and the Latine community. I didn’t know how much love and support we would receive from this show, but it was overwhelmingly incredible. I loved bringing Daisy to life.”