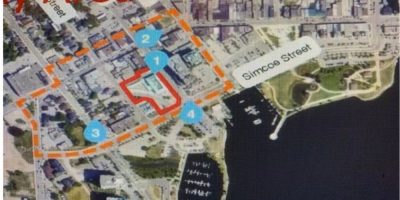 Ward is referring to the proposed Barrie Bayside Market District, which says the Market Precinct Task Force is centred around two buildings.

The report was presented to councillors on Monday night and would see the current bus terminal on Maple Avenue transformed into a permanent market, while a 10,000 square foot building would be constructed on the site for a new Barrie Farmers’ Market (BFM) that would operate six or seven days a week. The BFM’s home is currently at Barrie City Hall, in the rotunda in the winter months and outside when the weather is warm.

The report says the area surrounding the permanent market and the farmers’ market will draw other complimentary businesses, including restaurants and artisans.

The transit terminal will be freed up when bus service shifts to the Allandale GO station, likely in spring 2023.

Besides revitalizing the west end of the downtown, the task force says it will encourage people to live in the city’s core -and it uses Toronto’s St. Lawrence Market as an example where there are developments around the site and the market is a selling point for surrounding condo projects.

The report says a permanent market can host a range of different vendor types such as food and drink, arts or clothing.

“St. Lawrence Market in Toronto and the ByWard Market in Ottawa are successful examples of market precincts that are built around a centrally located, permanent market building,” the report states.

Seeking public comment, the task force received over 2,100 responses, with the vast majority in favour of such a project.

“We constantly saw people use terms like “the vibe,” “unique,” “fun,” “diversity” and “international” when describing what they liked in other markets or what they wanted to see in a Barrie market,” according to the report.

While questions about cost and funding remain unanswered, Ward said the timing is perfect.

“As mentioned in this report, there’s more than 4,000 units either under construction or approved in the area within a 15-minute walk. Those are the people that are going to activate the market every single day. They’re going to come down maybe two or three times a week and get their groceries and come down to buy stuff. By the time the market opens in 2024, those people will be moving into the first of those buildings.”

Ward noted the only numbers they had to work with was a city commissioned report from 2016 which pegged the cost between $5.6 million to $6.5 million. He said the lead architect report in 2017 estimated the cost at $8.9 million, which also offered ways to save money. But those reports included a 7,500 square foot farmers’ market rather than the 10,000 square foot structure necessary to meet the BFM’s current and future needs.

“There is not a chance the city is going to pay 100 per cent of the fees,” said Ward. “We’ll depend on other levels of government to help us with the cost. I think there’s Simcoe County money that we could get for it because it’s going to be their county farmers.”

Mayor Jeff Lehman said what is being proposed will bring an energy from the waterfront up to the downtown.

“What we should have here is a tourist attraction in a district that is going to be a delight for our residents and a delight for tourists.”

The lengthy motion unanimously approved by council on Monday says the city would hire either a contract employee or a consultant, with a $100,000 budget funded from the reinvestment reserve, to do a number of tasks associated with the project.

Applications for grants and sponsorship opportunities would be required to cover the project’s capital costs, and a business case for the market would be prepared as well as a precinct plan including programming strategy, identification and implementation of market operations, detailed designs for the permanent market and farmers market, and signs.

As well, a streetscape master plan strategy would be prepared, including possible recommendations for amendments to the Official Plan, zoning bylaw and the community improvement plan, a marketing and recruitment strategy would be undertaken, pop-up shop programs prepared, and there would be collaboration with local developers.

Letters of intent would be secured for vendors for the market, a public art policy subcommittee would be created or work would be done with the existing Barrie Public Arts Committee.

The cost of building the market would be included in the city’s capital budgets, beginning in 2023.

The city would also consider acquiring lands in the immediate area of the market district should it be determined that additional property would be needed.

City staff would be required to report back to council with intended timelines and resource requests by the end of March 2022.

The motion will come up for a final vote at the city council meeting on Feb. 14.