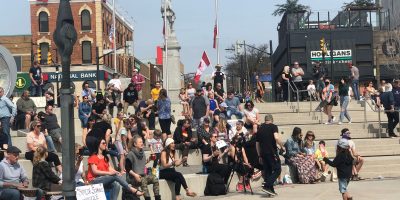 A city councillor has tweeted his concern about the attendance of People’s Party of Canada leader Maxime Bernier at an anti-lockdown demonstration planned in downtown Barrie on Saturday.

The anti-science rallies that have been happening on Saturdays in Downtown #Barrie appear to have a far right political figure attending this weekend. He should stay away.

This is what happens when dangerous political forces go unchallenged.#Barrie

Keenan Aylwin told Barrie 360 it’s a serious issue that needs to be addressed.

“Not only are these protests putting our whole community at risk by blatantly violating public health measures by not wearing masks and gathering in large crowds, but with their right-wing rhetoric they are putting vulnerable people in our community at risk, and particularly black, Indigenous and people of colour.”

Bernier confirmed in a tweet his attendance at the rally.

Come meet me at the Freedom Rally in Barrie this Saturday (April 17)!#EndTheLockdowns pic.twitter.com/03fAVrN8Fo

There have been anti-lockdown protests at Meridian Place on Saturdays for the past month, generally unmasked crowds listening to music and speeches.

After last Saturday’s rally, that police estimated was attended by about 300 people, the organizer was issued a Provincial Offences notice due to being in contravention of the Reopening Ontario Act. It comes with an $880 fine.

“I recognize that they have a right to freedom of expression under the Charter of Rights, but they do not have the right to put our community at risk by blatantly violating public health orders,” said Aylwin.

“I do understand the frustration. If you ask me, our governments have failed in a lot of ways to adequately address the pandemic. I hear people saying lockdowns don’t work. But the reality is that we’ve really been in a full lockdown in Ontario. We’ve been put in situations with half measures like the virus spreads through workplaces. This only serves to create more fear and doubt.”

Aylwin said he is concerned as to how the anger is being expressed and believes it stirs up dangerous rhetoric that may harm people of colour in the community.

“People who are taking advantage of the anger and frustration and turning it towards vulnerable people rather than the people who are actually responsible for not adequately addressing the pandemic in our province.”

He created the People’s Party of Canada in September 2018 and lost his seat in the House of Commons to a Conservative the following year, and was soundly defeated in a Toronto by-election last October.