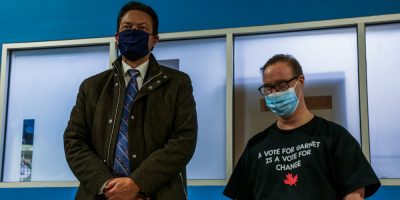 Barrie Mayor, Jeff Lehman visited Habitat for Humanity Huronia this week to see Garnet, who is hoping to run for mayor in the upcoming election.

While he used to be all about James Bond, Garnet’s newest passion is to one day run for mayor. He has already created lawn signs, business cards, and t-shirts with his awesome slogan: A vote for Garnet is a vote for change. Running for mayor would be just one more way Garnet wants to be involved in the community. He already volunteers at Habitat for Humanity Huronia, was involved with the Special Olympics, and spends time at the Holly Community Centre. “He has a very active social life, more active than mine!” joked his sister Debbie.

Having seen how passionate Garnet was about it, his sister also wanted to surprise him with something special. “I thought it would be really cool, as a birthday present to him, to meet the mayor”. She reached out to Jeff Lehman who immediately thought it was a fantastic idea and planned a visit to the store.

The moment the mayor walked through the doors at Habitat for Humanity Huronia, Garnet’s face lit up with excitement. He couldn’t believe the mayor had come just to see him! Along with his visit, Garnet also got a brand-new backpack and City of Barrie notebook to help plan out his mayoral campaign.

As if we needed any more proof of his giving nature and excellent character, before giving the Mayor a tour around the store, Jeff asked Garnet why he wanted to run for mayor. Garnet’s response was simply “I want to help you”.

Related Local News: Power of the Purse is back raising money for Dress for Success!

We can’t wait to see his signs and t-shirts all around town, and think we can speak for all of Barrie when we say our city would be lucky to have a mayor like Garnet!