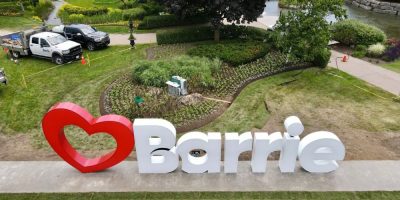 Coun. Mike McCann speaks confidently about what the “Love Barrie” sign will do to help tourism and downtown businesses, as well as something the entire community can enjoy.

The 10-foot-tall sign is being erected at Heritage Park on the waterfront, just in time for Canada Day. The sign will have a heart that people will be able to stand in and pose for photos.

McCann says recognition of sponsors will take place in July or August.

The sign has been controversial at city hall and among residents since it was approved by council last June.

Eyebrows have been raised in some circles about the $200,000 price tag for the sign and how the Ward 10 Coun. has gone about fundraising for it, with donations collected by his Heart Barrie company.

Council did put $15,000 on the table to be used annually for sign maintenance including the removal of graffiti.

“We were in the pandemic and downtown businesses were screaming for city hall to do something,” says McCann. “I thought what a great way to bring Barrie residents and tourists downtown by having a landmark sign because they are completely successful in so many other parts of the world.”

Trying to pin a dollar figure as to how much money McCann’s Heart Barrie company has received has been a moving target.

At a council meeting on June 6, McCann disputed a staff memorandum that indicated Heart Barrie had raised $375,000 in donations. According to the donor list published by the City of Barrie on its website as of June 30, 2022, the tally is $370,000.

“Unfortunately, city staff published numbers that were not correct, and I believe I made that very clear in council because there were some in-kind donations,” McCann told Barrie 360.

He said that the amount donated is in the $300,000 range with some of that being in-kind donations.

Asked what type of in-kind donations he has received, McCann said that could be for labour, advertising, and promotion. He says he let staff know the numbers were wrong, and they were published anyway, which McCann blames on miscommunication.

McCann told Barrie 360 that he believes he will have quite a large bank balance of between $80,000 and $90,000 which he indicated will go to the save the beaver and save the turtles program, as well as to charity.

“Everything is transparent, said McCann. “

“I generally wouldn’t comment on such weak comments put out by other people,” he added, when asked about questions directed his way by some on council about his fundraising effort. “I believe they are either ignorant or it’s politically motivated to tarnish my reputation.”

McCann emphasized that nothing he is doing is illegal.

“I’ve got a third-party accounting firm that is doing all the accounting and all the numbers are there,” he explained. “Once I have collected all the money, once I have paid all the HST, and all the administration, I will have a large bank balance and everyone will see clearly where all the money went. There is nothing shady going on and nothing ambiguous. Luckily with numbers, it’s all black and white.”

McCann says it did not take him very long to get commitments for the money but added it has taken a little longer to actually receive the money.

“There were some people who paid the city directly, but they had to pay Heart Barrie, so they had returned cheques and all that kind of stuff. But at the end of the day, we raised the money, and we have the sign, and we’re going to have tens of thousands of dollars going to local charities, and the beavers and turtles.”

McCann said donors to the sign will be the decision-makers around which charities get money from the fundraising effort.

“My job was to have the vision, to get council on board, and to raise the money,” he said. “As soon as I hand in my financials then my job is done, and I am going to sit back and enjoy it (the sign).”

That any funds raised on top of the $200,000 for the Heart Barrie Signage where no donation receipts have been issued be donated to the Save the beaver and Save the turtle programs in the City.