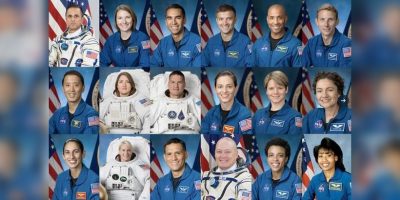 Nine women are among the 18 astronauts who will train for NASA’s upcoming Artemis missions, with the goal of sending humans back to the moon and, eventually, to Mars. The space agency is aiming for a 2024 moon landing — and this time, it won’t just be men making the trip.

NASA has promised that the Artemis program will send the first woman to walk on the moon. Here are the nine candidates, whose missions have not yet been assigned:

Koch has worked as an electrical engineer with NASA and Johns Hopkins University, in addition to research positions in Antarctica and Greenland. She was selected to train as an astronaut in 2013.

Koch has flown to space once before, in 2019, spending 328 days aboard the International Space Station — the longest single spaceflight by a woman. While aboard the station, she participated in six spacewalks, including three with fellow astronaut Jessica Meir — the first all-female spacewalks.

Koch said she would happily go to the moon if selected. “A mission like that would be such an incredible honor,” Koch told CBS Evening News’ Norah O’Donnell after returning from the ISS earlier this year.

“We have to answer humanity’s call to explore,” she said.

Jessica Meir was born and raised in Caribou, Maine and earned a Bachelor of Arts in Biology from Brown University, a Master of Science in Space Studies from the International Space University and a Doctorate in Marine Biology from Scripps Institution of Oceanography.

Meir has worked for Lockheed Martin’s Human Research Facility and as an assistant professor at the Harvard Medical School/Massachusetts General Hospital. She also participated in Smithsonian Institution diving expeditions to the Antarctic and Belize, encouraging “everyone” to learn to scuba dive.

Meir was also selected in the 2013 astronaut class. She has made one flight to space, in 2019, spending 205 days aboard the space station and conducting three historic spacewalks with Koch.

“I think I’ve always looked up at the moon and wondered what it would be like to be there,” Meir said. “I don’t look at this as my own accomplishment or something just for me. This is our mission. This is everybody’s mission Our entire planet’s, really.”

McClain was a Senior Army Aviator and has more than 2,000 flight hours in 20 different aircraft.

Also a member of the 2013 astronaut class, McClain most recently served as flight engineer on the ISS. During her time in orbit in 2018 and 2019, she completed two spacewalks.

“Our destiny is always to go and see what’s further and what’s next,” McClain said.

Before becoming an astronaut, Rubins was part of the team that developed the first model of smallpox infection. She has also worked at MIT’s Whitehead Institute for Biomedical Research, studying viral diseases.

Rubins was selected in the astronaut class of 2009. During her first flight in 2016, she became the first scientist to sequence DNA in orbit.

Rubins is one of the five NASA crew members currently aboard the International Space Station, after arriving in October for a six-month mission as a flight engineer. She has conducted two spacewalks and logged 115 days in space.

“When we’re having dark times, to think of the fact that we might have people on the planet able to look up and know that there’s humans on the moon, and that we’ve done this as a joint international collaboration, I can’t even describe what kind of benefits that might be,” Rubins said.

Wilson is the longest-serving astronaut on the Artemis team, selected in 1996. She has participated in three space shuttle missions, in 2007, 2007 and 2010, logging more than 42 days in space.

Wilson has served as a leader of NASA’s Glenn Research Center and, as a member of the Astronaut Office, she is currently the Mission Support Crew Branch Chief.

Mann is a Lieutenant Colonel in the Marine Corps, deploying twice to Iraq and Afghanistan. She was also selected in 2013, but has not yet flown in space, instead working on the commercial crew program.

Mann’s first flight will be on the first crewed flight of Boeing’s Starliner spacecraft to the ISS next year.

“What we’re gonna learn on the moon goes beyond space exploration,” Mann said. “It benefits humans on earth, it gives enthusiasm to our younger generation to go after their dreams to help be a part of this evolution of the human race.”

Moghbeli served in the Marine Corps, with over 150 combat missions and 2,000 hours of flight time in over 25 different aircraft. She joined the NASA class of astronauts of 2017 and has not yet flown in space.

A spaceflight rookie, Barron is Navy veteran, serving as a submarine warfare officer and a member of the first class of women commissioned into the submarine community. Barron is also a member of NASA’s 2017 astronaut class and has not yet flown in space.

Jessica Watkins, from Lafayette, Colorado, holds a Bachelor of Science in Geological and Environmental Sciences from Stanford University and a Doctorate in Geology from UCLA.

When she was selected by NASA in 2017, Watkins was a postdoctoral fellow in the Division of Geological and Planetary Sciences at the California Institute of Technology, where she worked on the Mars Curiosity rover. She has not yet flown in space.