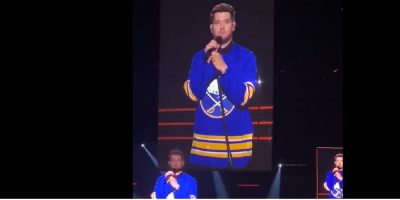 Being Canadian doesn’t make him a Leafs fan.

Michael Buble, who’s from British Columbia, made it hilariously clear how he feels about the Toronto Maple Leafs during his gig in Buffalo, NY on Tuesday night.

“I know there are people who came from Ontario to see the show…The Maple Leafs can suck it!”

What makes it funnier is that Buble was due to play in Toronto the following evening. No word yet on how the crowd reacted to him.

His comments obviously divided fans, with some commenting they will no longer play his Christmas album this season

Others think he’s simply the best, including the Sabres, who shared the clip.

…so yeah, we love @MichaelBuble pic.twitter.com/obkDSsEEvO